A Job for Elves

In the Baltic states on Europe’s eastern edge, the corona pandemic has breathed new life into bots and propagandists of all creeds and colors. But it has also provided those fighting disinformation a new sense of purpose. 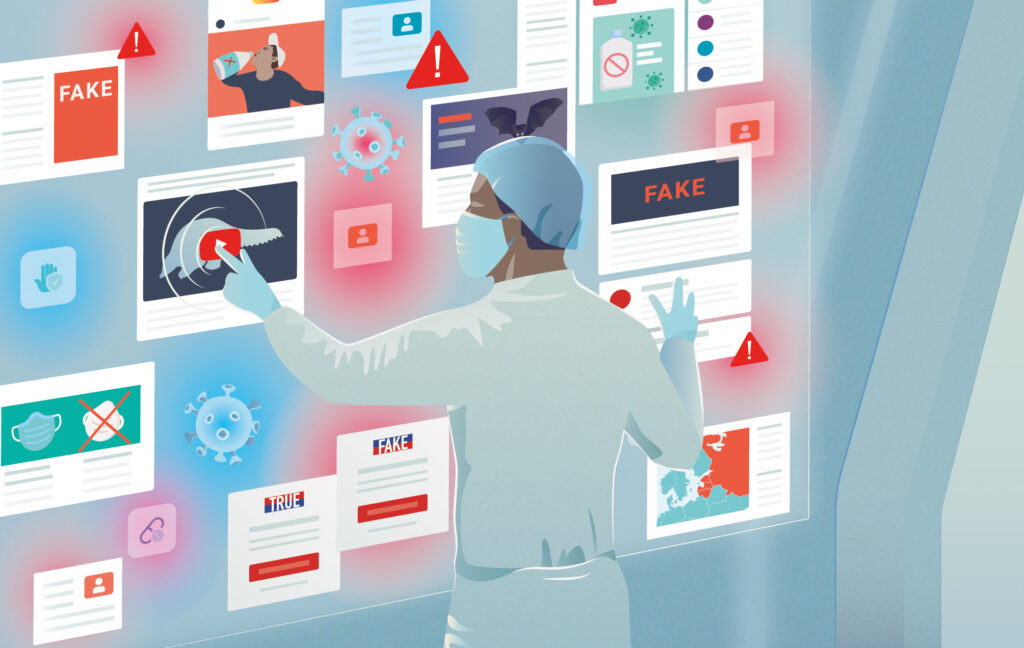 We clear security at Santaros Clinics, the largest hospital in Vilnius, with the radiologist Jurgita Sejonienė at the crack of dawn. “I check my phone for the first time every day at six a.m.,” she says, her words echoing through the empty corridor.

During the day, the 39-year-old takes X-rays of cancer patients. But any spare minute she has is spent on her phone, scrolling for coronavirus-related disinformation.

Sitting on a windowsill overlooking the Lithuanian capital on the 12th floor of the hospital, she points out several posts and articles on her phone shared on the celebrity powerlifter Žydrūnas Savickas’ Facebook page. “Is quarantine the first step towards concentration camps?” one asks. “5G causes coronavirus,” says another.

Along with hundreds of other Lithuanian medics, Sejonienė joined the “Elves” just a few weeks ago. A grassroots movement based in Lithuania, it was founded in 2015 to fight disinformation from Moscow. The Elves—named that way to juxtapose themselves against the Kremlin “trolls” spreading the disinformation—flag suspicious accounts, fake news and hate speech to tech platforms. Since March, the group has a new task force which focuses exclusively on fighting fake news about the coronavirus.

On its Facebook page, aptly named “Coronavirus – The Real Info”, the group breaks down news coverage of corona and debunks myths.

What makes the Elves unique is that two-thirds of the group’s 15 administrators themselves work in the health care sector. That sets them apart from the dozens of other Facebook groups in Lithuania dedicated to the coronavirus, many of which spread inaccurate information, both wittingly and unwittingly.

The Elves’ fact-based approach appears to be a recipe for success. With 40,000 followers, the group’s page has a bigger following than any of the other Facebook groups on the topic.

Asked whether she feels safe exposing conspiracies and those spreading them, Sejonienė says: “When I’m X-raying people, I only see them on screen, I don’t meet them in person. So it is with the fight between trolls and Elves.”

In the Baltic states on Europe’s north-eastern edge—Latvia, Lithuania and Estonia—the pandemic has breathed new life into bots and propagandists of all creeds and colors, ranging from anti-vaxxers and Holocaust deniers, to those promoting conservative family values. These groups were active online before, but the health crisis has expanded their audience.

“When people’s livelihoods are on the line, they are more likely to spread disinformation,” explains one of the Elves from his office during a video interview.

That realization seems to have sunk in with tech platforms, too. Having faced an avalanche of criticism for not doing enough to combat disinformation, they are now stepping up their game.

The Google News Innovation Fund recently allocated a sum of 100,000 euros to fight disinformation in Latvia and Lithuania. It is not just funding local initiatives like the Lithuania-founded Debunk.eu website, but also paying for their promotion in prominent media outlets such as the Financial Times.

In the meantime, Facebook has partnered up with local outlets in the Baltics to screen news coverage. Among them is Re:Check, an initiative by the Center for Investigative Journalism Re:Baltica. Since 2011, it has led the fight against disinformation of all types. Now it also flags around 15 fake news posts related to COVID-19 every month. “Fact-checking works,” says Inga Springe, head of Re:Baltica, during a webinar. “95% of Facebook users don’t open messages which we have flagged as fake news.”

But fighting disinformation is also a Sisyphean task.

To give one example, one of Facebook’s fact-checking partners, the website 15min, has become the target of a Facebook campaign to “Unfollow 15min.” Dozens of copycat websites with similar sounding URLs but very different coverage have also sprung up, causing confusion among readers. Fact-checking platforms in Latvia and Estonia have faced similar backlash.

Sunny weather has encouraged Stanislav Pupkevich to choose an open-air café on Tallinn’s Town Hall Square as the setting for his latest live broadcast on YouTube. Like most of the Estonian capital, the square is almost deserted.

With Pupkevich are seven others, talking animatedly among themselves in Russian. “The lockdown is to blame for Estonians’ terrible mental state,” one of the elderly group members with a weathered look says into the camera. “All Estonians should take to the streets in protest.”

“What does the government need the virus for?” another, wearing sunglasses and munching on a slice of pizza, asks the camera conspiratorially. Pupkevich answers with confidence: “This is part of a global restructuring, as happens after war. But this time, instead of a war, they’ve invented the coronavirus.”

With “they,” Pupkevich is referring to the Estonian authorities, who have introduced a series of measures to curb the spread of the virus. With the exception of families, gatherings are limited to two people and Estonians have been urged to maintain a two meter distance. Shops and other businesses have also been forced to close. With 1,700 coronavirus cases, the country appears to be handling the pandemic effectively, but in some corners of society, the measures are seen as a veiled attempt at tightening control. Among the most vocal “anti-quarantine activists” are members of the country’s ethnic Russian population, many of whom have found an outlet for their grievances in a Russian-language Facebook group called “For the Future.” The group, which has 1,000 members, has made a mission out of undermining and ridiculing the country’s authorities. Paid ads feature Estonian President Kersti Kaljulaid as a farmer in a headscarf, mocking her proposal for those out of work to find employment in the agricultural sector. Others depict Estonians who abide by the quarantine rules as serfs.

Pupkevich and his elderly companion livestream their discussions several times per week. “My goal is to inform the public. This is a fight against disinformation,” Pupkevich says, a wry smile on his face, as our nearly-empty bus passes the closed shopping mall where he worked before the lockdown.

It is not that Pupkevich does not believe the coronavirus exists, as some of his peers argue. But “coronavirus is as dangerous as the flu,” he says. Pupkevich brands himself as the leader of a nationalist movement called Aera Vulgaris (“the Common Era” in Latin). The movement’s Facebook page features a video by an unknown hip-hop artist calling upon “Slavs to unite in their difficult path.” The video also features a map of Eastern Europe, including Russia and its former Soviet satellites, which to this day have sizable Russian speaking populations. “We’re entering the era of the common folk,” Pupkevich says.

Propastop.ee, a news debunking website funded by the Estonian Ministry of Defense, has accused Pupkevich of rubbing shoulders with people who openly work for the Kremlin, something he denies. “Propastop.ee writes that about anyone they don’t agree with,” he claims. However, a glimpse at his previous record reveals a consistent pro-Kremlin, anti-Western agenda. Before the epidemic, Pupkevich was an outspoken NATO critic, organizing rallies in his native Narva, a town on the border with Russia where 88% of the population are Russian-speakers.

When he ran for Narva’s municipal council two years ago, one of his rallying cries was for a “truly independent” Estonia. That is, a country which would turn away from Brussels in favor of a greater Slavic alliance.

Campaigns like Pushkevich’s tap into Estonia’s deeply rooted fear that Moscow is attempting to draw the country back into its orbit by using the ethnic Russian population of Estonia’s most eastern region Ida-Viru to fuel tension. Pupkevich is dismissive of such fears. “Why should the Kremlin attack us? It’s busy with much more important borders,” he says right before jumping another bus to Lasnamäe, the most populous and mostly Russian-speaking district of Tallinn.

On April 22nd, journalists and bureaucrats in another Baltic nation, Lithuania, woke up to a surprising email in their inbox. The attached letter, signed by Secretary General Jens Stoltenberg, thanked the country for protecting NATO troops stationed in the country from coronavirus and proceeded to apologize for withdrawing said troops “because of concerns for their health.” Could it be true?

Two days later, Mike Collier, a British journalist living in neighboring Latvia received a similar hoax letter. After quickly scanning its content, Collier, who works as the editor of the English language website of Latvia’s Public Broadcaster LSM, concluded it was, in his own words, “horseshit”, and binned it.

To his shock, however, others who had received the same email began commenting on it online, including a link or screenshots to the original. Angry and frustrated, Collier wrote an opinion piece for his website: “Fake news source material may also achieve its spread, not via public ignorance, but thanks to the diligence, pride or even intellectual vanity of the people exposing it.”

The question of whether those who are debunking hoaxes actually help disseminate them further is also one that troubles Simmo Saar, Head of Communication at Estonia’s Health Board. “I ask myself whether or not I’m being instrumentalized in dissemination every time I debunk a myth,” he says during an interview.

The Health Board recently launched a separate Instagram account to dispel myths around coronavirus. Often, it does so in the form of a question-and-answer post. “Do antibiotics help against coronavirus?” one video post reads. “No!” is the answer, in red.

“We’re actively researching our audience, and dispel only those myths that people are asking us to,” Saar says. In six weeks, the Instagram account has garnered nearly 2,000 followers.

Playing into the hands of those who spread conspiracies and disinformation is a low level of trust in online media in Baltic states. According to the Riga-based SSE Center for Media Studies, only 40% of citizens in the Baltic states say they trust online outlets.

But the picture is not all gloomy. As well as an unprecedented challenge, the coronavirus pandemic has breathed new life into many civic organizations. Before the crisis, the Elves struggled with internal disagreements over which methods to use. United by a common enemy, they now seem to have found a new purpose.

“The coronavirus crisis has shown that Elves can unite not just against the Kremlin,” says Elves member Ričardas Savukynas, “but that they can work together in teaching health care basics too.”

Fact-checking works. 95 percent of Facebook users don’t open messages which we have flagged as fake news.

When I’m X-raying people, I only see them on screen, I don’t meet them in person. So it is with the fight between trolls and Elves.

With 1,700 coronavirus cases, the country appears to be handling the pandemic effectively, but in some corners of society, the measures are seen as a veiled attempt at tightening control.

I ask myself whether or not I’m being instrumentalized in dissemination every time I debunk a myth. 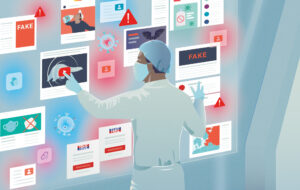