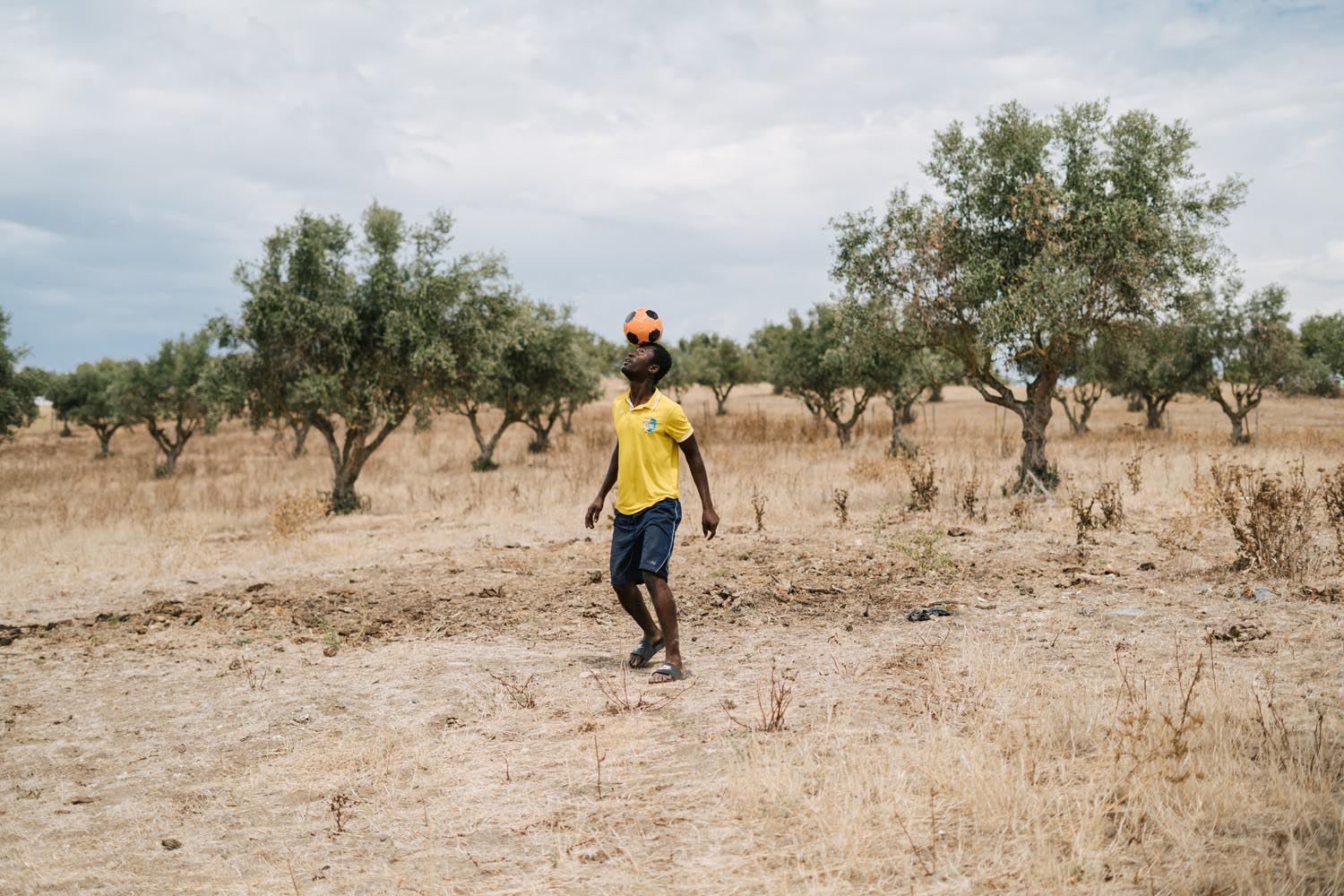 Between rows of crops 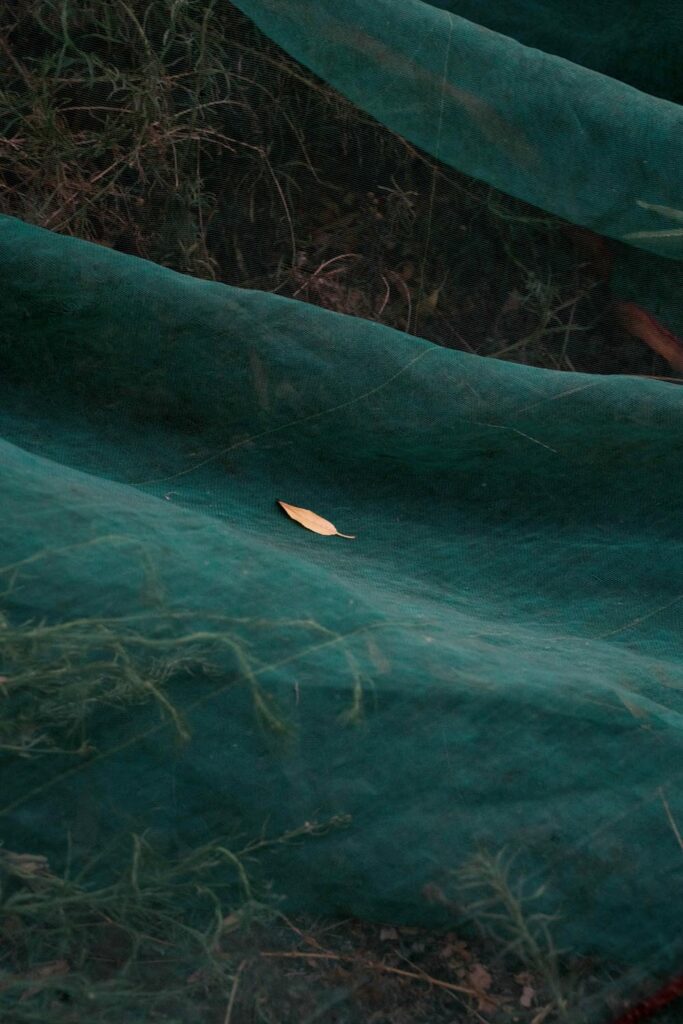 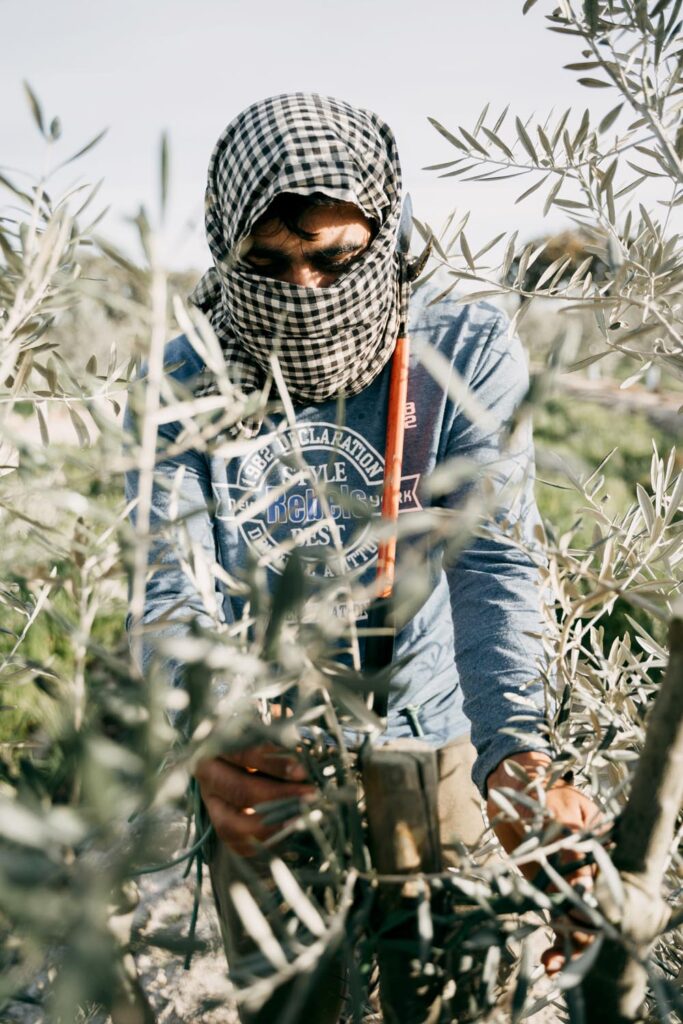 The fields surrounding the Portuguese city of Beja are lined with olive groves, cork trees, and almond groves. The still scenery is complemented by rolling meadows, reflecting the slow pace of life in the region. Further south, in the surroundings of Odemira, berry greenhouses and vineyards dominate the landscape, which abruptly ends in the cliffs of the Atlantic Ocean. In recent years, Portugal’s agricultural sector has gained economic importance—and the historically agrarian Alentejo region has been at the centre of this transformation. Yet young people are migrating to cities like Lisbon or abroad, and the area is left with an ageing population. To meet the growing need for a workforce and the low prices of the consumer market, the region is increasingly relying on migrant workers—even if undocumented.

Alberto Matos is head of the Beja office of the migrants’ rights organisation Solidariedade Imigrante. He estimates that at the peak of the olive harvest, in November, there are approximately 28,000 immigrants—from Asia, Sub-Saharan Africa and Eastern Europe—in Alentejo. Here, predominantly seasonal workers work long hours for low pay of 30 to 40 euros per day. While these labourers play a pivotal role in keeping the country’s agricultural sector afloat, they often face weak work regulation. Under the pressure of a globalised supply chain and intensive agricultural practices, many workers are forced to share unsatisfactory or container housing.

Agricultural development has transformed the region’s infrastructure: the controversial Alqueva dam was built, irrigation systems were developed, water supplies were contested due to the growing concerns about the effects of intensive—and poorly regulated—water use. But the region also reflects an influx of cultures, nationalities and traditions. In the surroundings of Odemira, Indian workers can now regularly be seen spending leisure time playing cricket in an empty car park. In the small civil parish of São Teotónio, Odemira, the number of Nepalese restaurants and Indian shops is truly unexpected. In the centre of Beja, the Wolof language, spoken in Senegal, Mauritania and Gambia is now commonly heard. Yet, rather than coexistence, the city currently reflects the separate realities of the migrant and non-migrant population.

As agricultural work is seasonal, payments depend on the crops yielded, the weather and employers following the rules. Maya Tamang from Nepal underscores the risky situation of labourers. “It is very tiring to work in agriculture in Portugal,” she says. She and her husband have been living in the country for five years together with their three sons: the season provides them with work for six months of the year and leaves them without a stable income for the remaining period. Even though the remuneration is low, access to necessary documentation is easier than in other countries, which makes southern Europe a popular work destination. But many workers get duped after arrival. 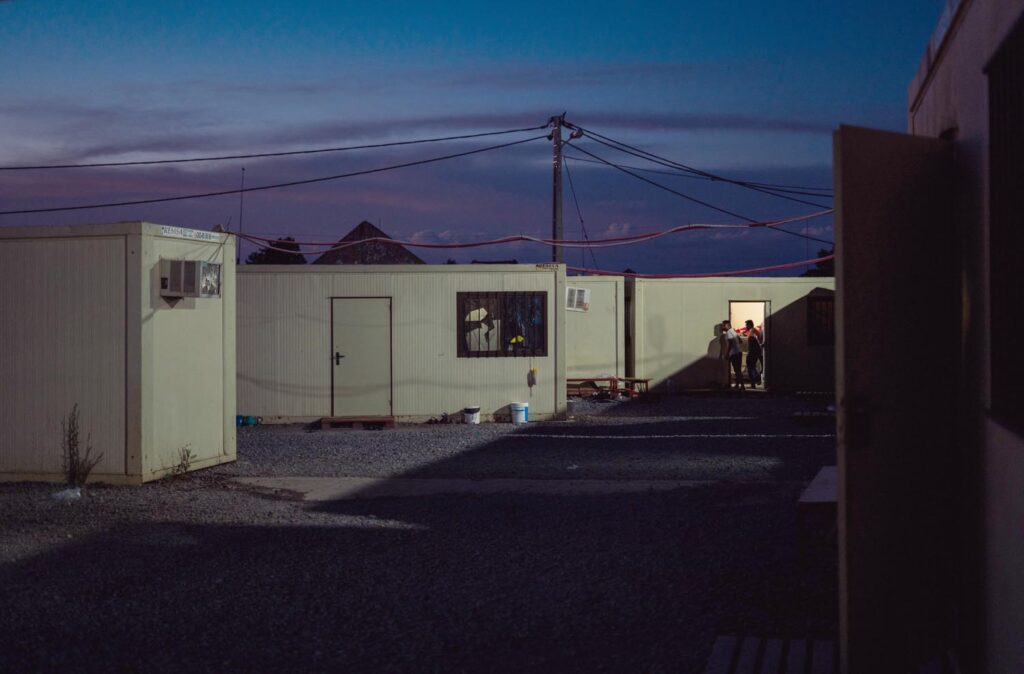 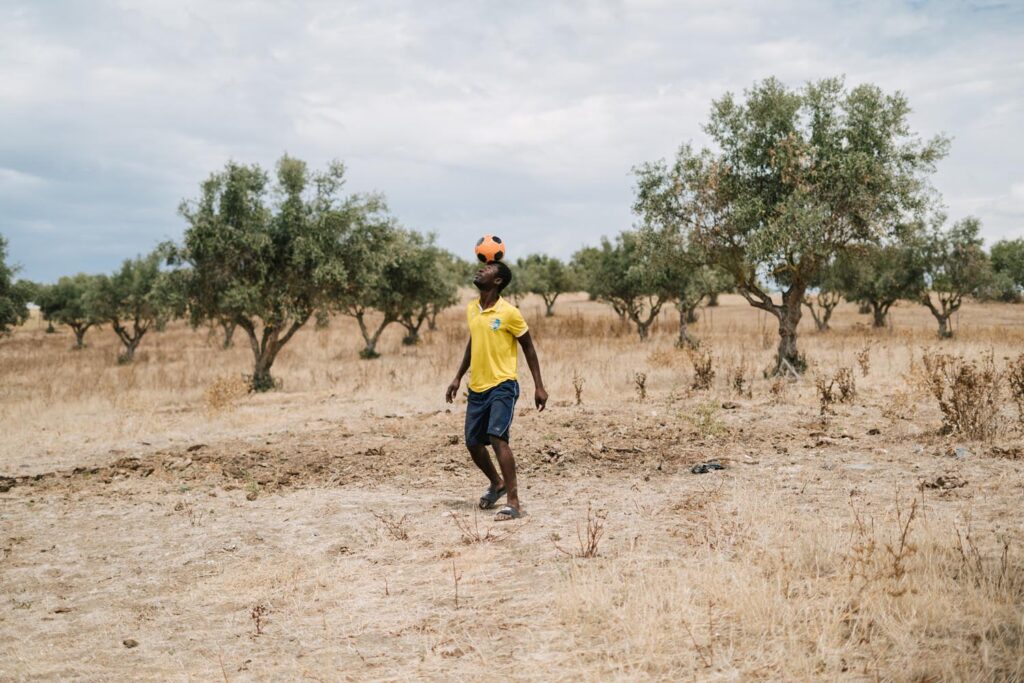 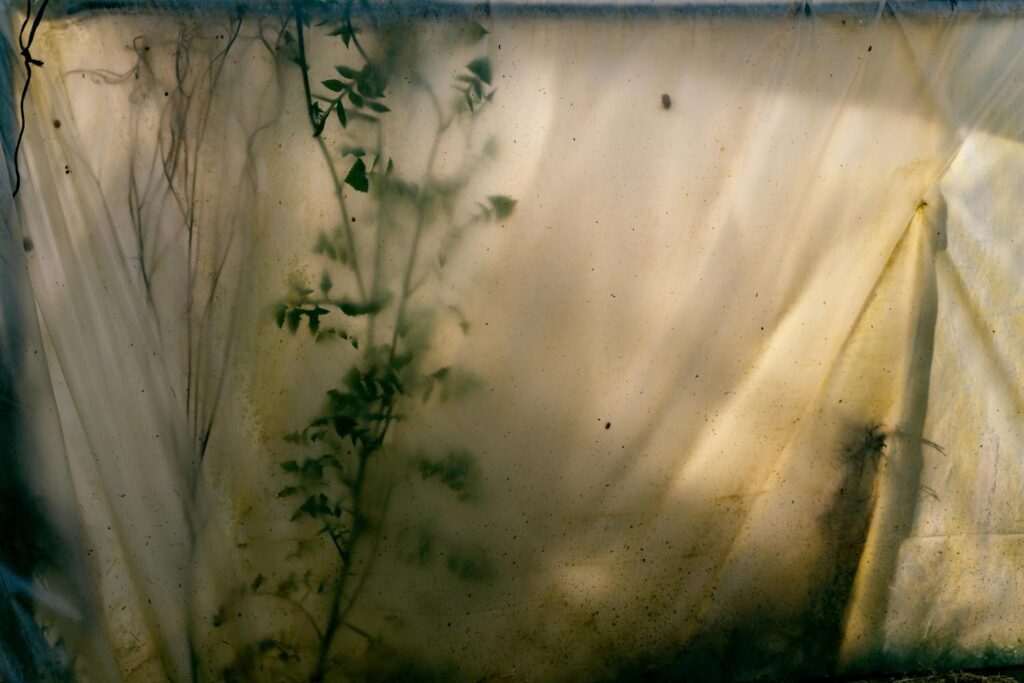 Satwant Singh from India’s Punjab region worked in the redberries industry in São Teotónio from September 2020 to February 2021. His work calendar shows the insecurity of seasonal work: from working around 20 days between October and November, his job soon diminished to just three to five days a month for the rest of the working period. In December, his Indian supervisor left Portugal. Social security contributions—a responsibility of the contractor and a requirement for any worker hoping for legalisation—ceased, along with payment of wages. The need to cover living expenses did not. Satwant’s is not a solitary case. Elaborate chains of work agencies and intermediaries appear and then disappear immediately, often evading taxes, social security contributions or wages altogether. The reality behind Satwant’s berry picking is replicated across many agricultural sectors in Portugal, above all when crops are meant for export, such as the olive industry.

When Covid-19 hit Portugal, its seasonal workers were hit twice as hard. Already living in precarious conditions, many migrants were daunted by the risk of unemployment. In response to the pandemic, Portugal announced that it would treat migrants and asylum seekers with a pending residency application as permanent residents. Many, however, continue to lack the necessary documentation and cannot access unemployment benefits. While national restrictions were slowly easing in April 2021, a cordon sanitaire—a containment measure restricting entry and departure—was imposed on Odemira and São Teotónio after a high increase of Covid-19 cases among agricultural workers.

However, there is a thin silver lining. To justify the cordon sanitaire, Prime Minister António Costa highlighted the workers’ “unhealthy housing, with overcrowding of dwellings” reporting an “enormous risk to public health, in addition to a stark violation of human rights.” Picking up on this social injustice, national and international media shifted their attention to the circumstances of Alentejo’s agriculture. Reflecting on the extraordinary attention, Teresa Barradas and Jaromir Wimmer of the Odemira-based TAIPA organisation, which has a long track of integration-related work in the region, argue that the picture is much more complex than housing challenges and infrastructural shortages.

This series underlines the complexity of the migrant labourer experience. The images highlight the role of essential workers trapped on the sidelines of the formal system, juxtaposing it with the intensified land use as well as the inadequate living and labour conditions present in Alentejo. 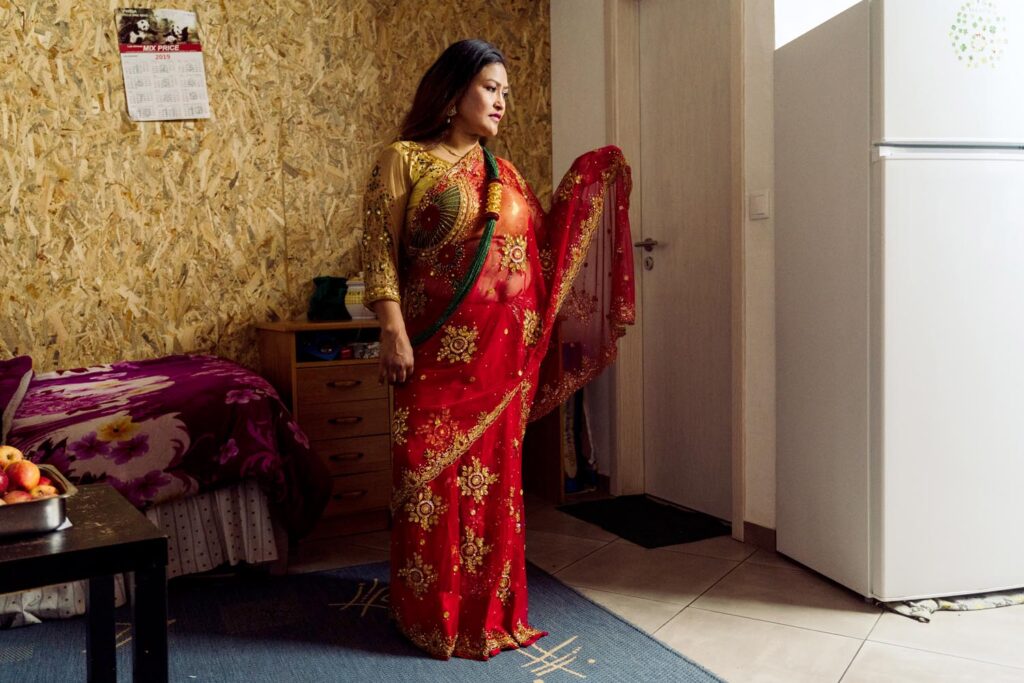 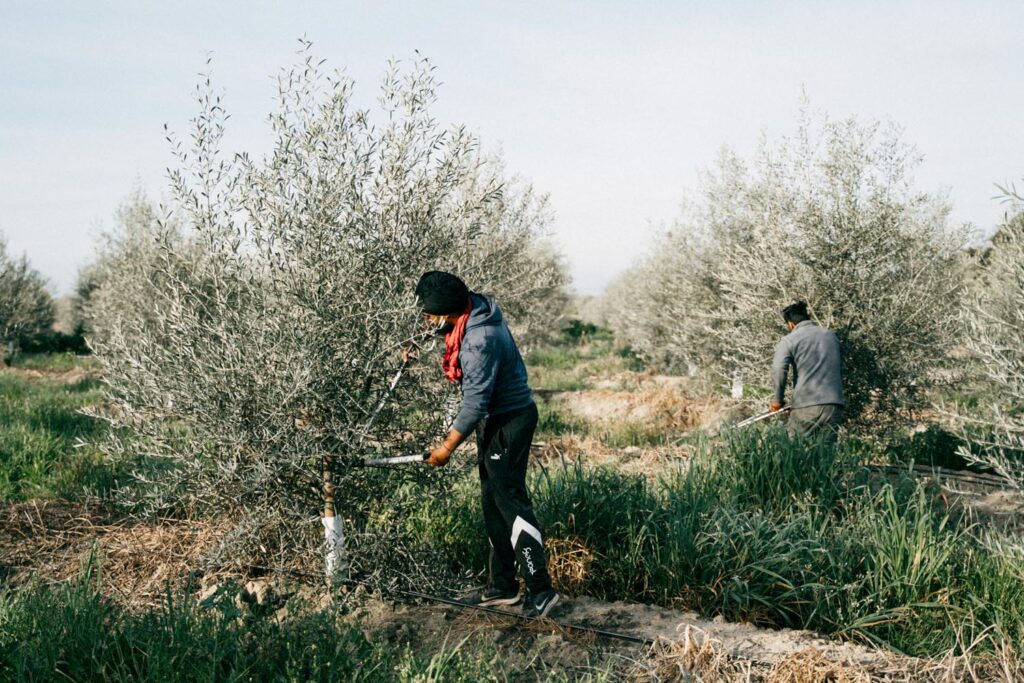 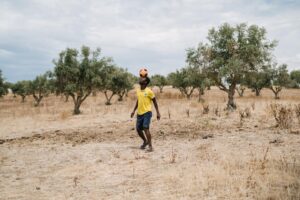