How my dad’s alcoholism has cost me my brothers

I first heard about my father’s alcohol problem when I was 18, had just returned from a year abroad, and was recovering from a surgery. Sitting in the park, my favourite aunt told me about his drunk driving, the passing out on our terrace, the tears on my brother’s face, the ambulances.

Four months later, my dad drove me to my student job for the first and only time. In the car, he attributed his “little problem” to the “Burgundian lifestyle” his father had instilled in him. He’d go to rehab, he said—an ultimatum set by my mother. Hours later, we all sat at the family Christmas party as if nothing was amiss. He drank iced tea, though. A first.

Ultimatums came and went. The stumbling increased, the bottles harder to find. Once, he fell asleep during my last driving lesson before my exam. I failed the test. We’d find alcohol everywhere. In hiking boots, between his collection of screws, in refilled water bottles in the car. Twice more, Mom took the first steps towards divorce. Twice more, Dad went to rehab and returned only to fall back into the habit.

In the end, I told Mom I wouldn’t come “home” again. I promised museum visits and going for tea in any city she’d choose. She could get a spare key to my place, if she wanted. But the house I grew up in became my personal no-go zone. I gave up on him, I told her. But never on family, I promised.

In the end, the divorce came, the alcohol stayed, and we didn’t give up on him. But years later, I wonder if it didn’t cost me my family after all. See, all we talk about is him. Our text messages are about him. Amid the problem-solving, I have lost track of the two other people on the sidelines—my brothers.

This story isn’t about alcoholism. It’s about what it does to the people around you. About the mounting debt, the financial handouts, the unemployment checks, the doctor’s visits, the strokes, the vision loss, the lies, the unknown, the suspicion and ultimately—about the stubbornness of those who can’t give up on you. 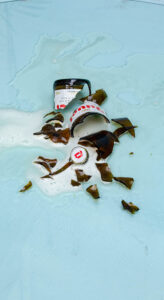