How we stopped being comrades

In Czechoslovakia, recent events have shown the ghost of old comrades in new forms.

It was November 1989 and I was trying to breathe in, together with the sharp air, a new experience: freedom. We were testing ourselves in new roles, unknown to us until then—courageous, provocative, loud, affectionate and inspiring roles. Above all, in free roles. Instead of applauding as we gathered at squares, we jangled our keys.

We told ourselves that the revolution had taken us by the hand and led us out from Plato’s famous cave and we were able to perceive contours, forms and colours, not just shadows on the wall. But were all of us really able to see much more clearly all of a sudden?

We were beginners in freedom.

Calling each other comrade lost its value overnight—in the morning we were all citizens. We were trying to grasp the difference between the freedom of that November, and the ‘un-freedom’ in which we had grown up. We were inundated by new definitions, like rain after a drought. The earth was absorbing it, but we did not know what would grow in our gardens in the end.

A lot of people who lived most of their adult lives under communism were afraid. They were scared of losing their certainties—certainties to which the communist regime had condemned several generations.

They had nothing else, except these certainties: the certainty of being allocated a flat in a high-rise, prefabricated block in a housing estate; the certainty of a job for life; of oranges in shops before Christmas; and the certainty of one-party rule. The certainty of what had to be called “fraternal military help,” and two state channels on their black-and-white TVs. The certainty that everyone else was eating the very same lunch in canteens, and that all that was required was “to keep your mouth shut and toe the line.”

Or there was the certainty of fear and of informers, of hard manual labour for those who criticised the regime or even being sent to the uranium mines in Jáchymov. The certainty of the baksheesh, of the gifts and the bribes, of lavatories with no toilet paper, and most of us without a passport.

“Away with the communists,” we shouted then. Most likely we did not have in mind all the members of the communist party whom we knew personally: our neighbours, teachers, relatives, and the celebrities of socialism. Where would they go? We believed that communism would run off people like sweat after a purifying fever. Thirty years later we are finding out that for some, it will never run off.

Terézia, my great-aunt from the Slovak village of Gemerska Panica, swore at the communists her whole life. A hunched, devout woman, she would fly into a rage at the mere mention of the regime, lifting her bent head and unleashing a torrent of abuse: büdös komunisták (stinky communists). Even those who had confiscated cows and horses for the nationalised agricultural co-op were scared of her. They could not get to her.

She was sometimes warned not to swear in front of the children, as they could repeat what she said at school and their parents would get into trouble. “God will punish them all, the teachers included; why would they punish the children?” she would say.

We were taught from early childhood to distinguish between what we could and could not say at school. For instance, I wasn’t supposed to repeat what my grandfather, from the Hungarian city of Miskolc, used to say about the regime after several glasses of wine: that in Hungary the regime would collapse and then we would move there.

Grandfather used to bring us books that we could not get hold of in Slovakia and after classes, a teacher at my grammar school told me about samizdat—banned books—about what Beszélő, the underground opposition magazine, was and who Imre Nagy, the prime minister and leader of the 1956 Hungarian revolution, who was later executed, was. I learned that people were not burned in a public square for speaking the truth anymore. Instead, they were slapped in the face.

Freedom flowing into the streets

I moved to Bratislava in 1989. After two months we stopped attending university. We were not playing truant. We were revolutionaries. Our parents, if not marching with us, were at home listening to radios in the hope that the tanks would not arrive—in the same way that they had not arrived in Hungary and in Poland as their regimes started to fold.

Some of our teachers took off their blazers, put on old jumpers and marched with us. Everything around us gained speed. After years of stagnant waters, freedom was flowing from universities, theatres and public squares into the streets. It poured into the socialist apartments, cellars, and pubs where people bravely panned the regime after a few beers. There was no way of stopping it. It became a powerful river, carrying us along.

But freedom is not a birthright, and it will not automatically seep into the nation’s genetic code. No generation receives her ready-made: prepared for instant consumption. If we no longer take care of her, she will be kidnapped by individuals corrupted by power.

Without comrades, but with party members

Communist comrades became party members and the post-revolution generation of party apparatchiks was born. Without a vision, but with gilded toilets, collections of luxury cars with a price tag that would cover education for many generations of Roma children, a bevy of beautiful women without wrinkles, and bribed officials without inhibitions.

For a while, some managed to maintain the image of being a democrat, for the sake of the voter. But in the end, they could not resist the temptations offered by the state table. The public sector was left to the crumbs of the state budget, and pensioners were sent 50 euros before Christmas to make them feel that the state cared. Others got leaflets about enemies of the nation, and nationalism for the frustrated poor in the ‘valleys of hunger,’ where economic clans squeezed the last drops out of state funds.

Unlike under communism, party membership was no longer necessary for a successful career beyond being a welder in a factory or a school teacher. But a party connection brought significant economic advantages, positions in public administration, and the promise of ‘protection’ if you were caught implementing the darker side of party doctrine.

Three-time prime minister Robert Fico, of the Smer-Social Democracy party (Smer-SD), has upgraded the idea of what it means to be a political clan. The party became a family in the same way the concept is understood by the mafia: absolute loyalty, denial of responsibility, protection and career advancement. Officials who were grateful to the party for their jobs (or perhaps their boss was) kept lists in their heads of people who were to be served and were untouchable. These same lists were known, and the untouchability of the people in those lists was respected, by those who were supposed to investigate and prosecute them for crimes.

The party does not expel members because of corruption or abuse of power. But punishment and expulsion are certainties for those who criticise the head of their adopted family. If public pressure gets too great, those caught in acts of corruption or abuse of power leave the party so as not to harm it. Then they are quietly given a position at an embassy or some useless department.

They have been gradually undermining the rule of law, so it was only a matter of time before Marian Kočner, a convicted criminal and mafia figure with close ties to the former government, appeared, feeling safe and operating with the belief that in politics there are only two moral levels: low and lower still. After collecting dirt on the powerful so that he could blackmail them all when necessary, he ordered the murder of a Slovak investigative journalist Ján Kuciak to scare everyone. (He is charged with ordering the murder, but there is no definitive sentence in the case yet.)

A whole political generation treats freedom as if it is only going to last for one parliamentary term. They do not think about what is going to happen the day after they are no longer in power. Often, most of their energy is invested in ensuring their rule never ends.

Thirty years after the revolution, some people in the Visegrád region nod in approval at dictators who claim that human nature is not compliant with liberal democracy, and democracy, therefore, needs to be modified. Each nation can modify democracy according to its own needs, even to extremes, based on the government it has chosen.

They create enemies of the nation using well-known stereotypes, resurrected from history with great effort, using the help of conspiracy websites. A frightened voter is more willing to divide human rights into those of “others” and “we, who come first above all”. But there is not one version of human rights for white heterosexual Central European men, and another generic one for others.

After thirty years we find ourselves at the border between freedom and “un-freedom”. Those who are hijacking the future assure us that they are only protecting the identity of the nation against enemies, enemies they cooked up using the recipes of successful autocrats.

A couple of days after Russia launched its war against Ukraine, I recalled a memory from back in the early eighties. I had to run around with a gas mask on my face and throw artificial grenades into a hole in the ground. In communist Czechoslovakia, schools organised civil defence training twice a year to prepare children for a possible nuclear strike by “imperialist America”.

We stayed outdoors all day, imitating elephants because the filter tube of the mask resembled a trunk. Teachers took frequent cigarette breaks. Nobody was afraid. Our leaders told us that the Soviet Union would protect us forever.

Communist propaganda lied to us then in the same way that Vladimir Putin lies to his own people today. The real threat has been ripening in Russia all along. It has forced us all to live the unimaginable. Historical parallels with Munich in 1938, a settlement that resulted in Nazi Germany annexing part of former Czechoslovakia, no longer seem far-fetched. Putin is tearing people from their own soil and throwing them around like unwanted weeds. He thinks that a well-crafted lie can cover up mass graves.

If we were wondering how far the dissolution of democratic institutions, the elevation of hate speech to a state doctrine, and the suffocation of the free press could go, he has now shown us. Today the old spirits of our former “comrades” haunt us in their most hostile form. We have been warned.

We were taught from early childhood to distinguish between what we could and could not say at school.

A whole political generation treats freedom as if it is only going to last for one parliamentary term.

Today the old spirits of our former “comrades” haunt us in their most hostile form. 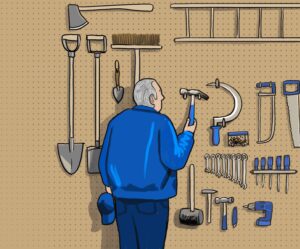