LGBTQ+ Asylum Seekers Struggle to Prove Their Sexuality to Authorities

“What were the colours of your bedsheets?” LGBTQ+ asylum seekers searching for safety were asked 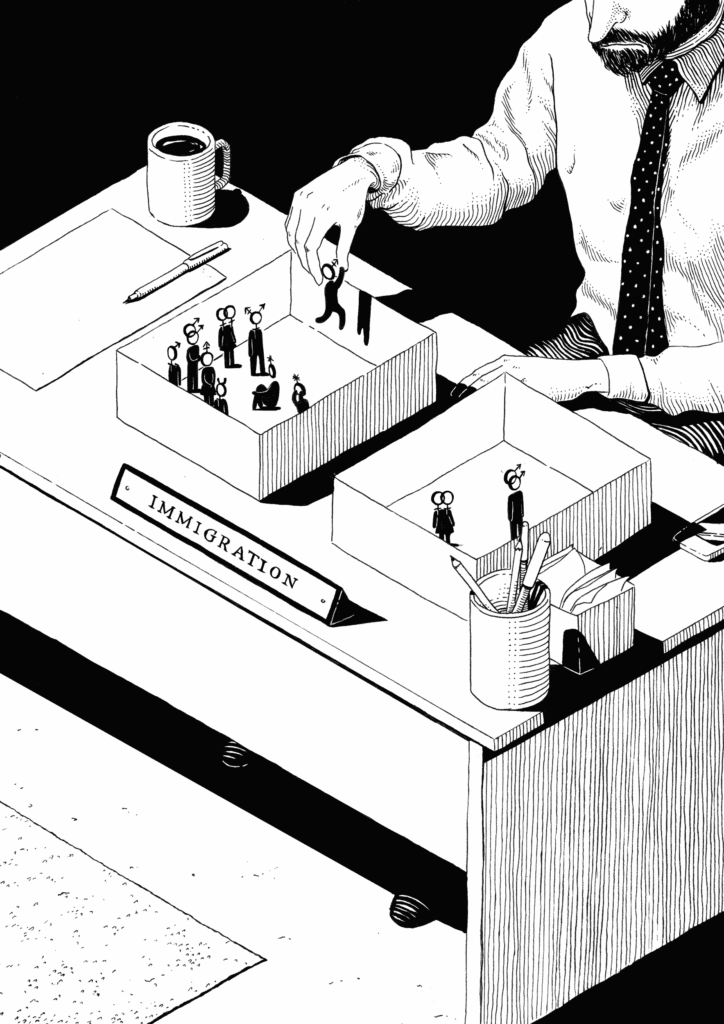 “I’d rather die than go back to Indonesia.” In 2018, Karl Yves Vallin tried to take his own life. He was on a student visa in Sweden, and could not bear the thought of returning to his home country, where, in 2015, the government had issued a fatwa that called for same-sex acts to be punished by caning, and in some cases the death penalty. While recovering at the hospital, a counsellor advised him to apply for asylum. “I am very open about being gay, and I was lucky that I had documented my life and was active within LGBTQ+ organisations,” he says.

When seeking asylum on the basis of sexual orientation or gender identity in European countries, applicants must prove to the authorities the legitimacy of their claims. A survey published in 2020 by the research project SOGICA (Sexual Orientation and Gender Identity Claims of Asylum) revealed that one in three LGBTQ+ respondents were refused asylum because the officers did not consider their story to be credible. Another report by the Swedish advocacy group RFSL—the Swedish Federation for Lesbian, Gay, Bisexual, Transgender, Queer and Intersex rights—shows that mistaken preconceptions and expectations about LGBTQ+ people on the part of migration authorities have a significant impact on their processing of asylum applications on the grounds of sexual orientation, gender identity and expression.

One such requirement is that the asylum seeker has gone “through a deep, inner emotional process,” says Aino Gröndahl, the lawyer who conducted the RFSL study. “The migration authorities require the applicant to be able to describe their own negative feelings of difference, stigma and shame.”

Asylum claimants are subjected to very intrusive questioning, including interrogations about the colour of the bedsheets during their first sexual experience. “For many years, the concern was that the decision-makers asked questions which were very sexually explicit. So asylum claimants were under pressure to show pictures and videos of them having sex with their partners, for example,” says Nuno Ferreira, SOGICA’s project leader.

One of the hundreds of examples gathered by the RFSL report is a 2015 asylum rejection motivation letter by the Swedish Migration Agency. The agency found that “based on the cultural context you come from [in Somalia], it is not credible that you have not had other concerns [than joy] regarding your sexual orientation.” In other words, the authorities didn’t believe that someone seeking asylum might feel at peace with their sexual orientation. Aino says: “They require the applicant to be able to describe their own negative feelings.” According to the lawyer, it is surprising that this should be happening in Sweden, where “the law is clear, and people have always been educated on the differences between sexual orientation, gender identity and gender expression.”

Yet the report finds that gender expression is often misinterpreted as sexual orientation or a “character trait,” leading to erroneous rejections and deportations of trans people to countries where they may be punished by death. “For example, a minor who clearly described herself as a trans woman was tried and assessed as a ‘homosexual man’ despite submitting extensive evidence of gender-affirming treatment. She was denied asylum,” reads the report.

“The migration authorities’ lack of knowledge and wrongful mix up between sexual orientation, gender identity and gender expression leads to their conclusion that the applicant is not credible, for example, because their self-identification and description about themselves are ‘stereotypical’,” RFSL’s research concludes.

Another report by the Dutch LGBTQ+ advocacy group COC showed that migration officers tend to address transgender asylum seekers by the biological sex assigned to them at birth and stated in their documents, rather than their gender identity. Although in some cases the interviewers asked about their personal pronoun, the documents usually remained unaltered.

In Iceland, Daníel Anarsson, executive director of the Icelandic LGBTQ+ organisation Samtökin ’78, says asylum seekers can change their gender recognition at any time. The most common practice is for their new ID to include their corrected gender and name, but there are exceptions.

In 2020, activists in the country intervened to stop the deportation of an Iranian trans teen and his family back to Portugal, their “previous point of departure.” The dissident family risked being arrested there by the Iranian National Guard and forced to go back to Iran, where gender minorities face widespread abuse and discrimination. Leaving Iceland, therefore, would put the child in active danger.

According to Human Rights Watch, at least 69 countries worldwide have national laws criminalising same-sex relations between consenting adults, with 11 still imposing the death penalty. The memory loss induced by trauma and the Post-Traumatic Stress Disorder that many LGBTQ+ asylum seekers suffer from because of their experiences at home, however, is often disregarded in the processing of their applications.

Azad (not his real name) started his journey through Europe in Greece, spending six months in the southern European country before being able to fly to Copenhagen using another man’s documents. Fleeing his native Iran, where consensual sexual activity between members of the same sex is punishable by death, Azad knew that his only chance at freedom was to flee.

But not everyone is aware of that option. The SOGICA project found that approximately one-third of the respondents did not know that they could claim asylum because of sexual orientation or gender identity when they arrived in Europe. And once the process starts, it can take years. “We’ve met many participants who have been in the asylum system for seven, eight, nine years, and their life is in limbo. They cannot work, they cannot study, they cannot have a range of experiences that other people have.”

In the meantime, claimants are usually placed in asylum centres. Yves, who had already been in Sweden for two years before claiming asylum and had friends there, chose not to go. “I decided not to live there because there are risks of being attacked by other asylum seekers.”

Claimants live in fear and anxiety about their interviews, too. “The official policies and the guidance tend to be reasonable and of a good quality,” says Nuno. “But then what happens during the actual interviews is very much dependent on the decision-maker. And sometimes they use their discretion to ask questions which are not necessary or appropriate,” says Nuno.

“They asked about my childhood, my family, religion, my sexuality, about my first sexual experience… things that are very private,” says Azad.

According to Annica Dahlqvist, from the Swedish Migration Agency, whilst most officers are not specialised in gender and LGBTQ+ issues, they are required to attend Gender, Gender Identity and Sexual Orientation training to work on such cases. Yet the RFSL report found that Swedish migration authorities still expect that LGBTQ+ people never take risks in their home country, by “for example, telling someone about their sexual orientation or gender identity.” In contrast, migration authorities expect the asylum seeker to have made realistic, long-term plans to live as LGBTQ+ persons. “To cohabitate and have a sexual relationship with someone of the same sex does not make one homosexual, according to the migration authorities, without verbal account for a deep, emotional process of self-awareness about the sexual orientation,” the report continues. Deviating from any of these norms often means that claims aren’t trusted.

New arrivals are expected to be aware of and use Western terminology to describe themselves. But language proves to be a common barrier. “I chose English for my interviews because I would not have felt comfortable having a translator from Indonesia,” says Yves. Azad did not speak fluent English when he first arrived in Denmark, so he was assisted by four different translators during his interviews. “I didn’t connect with them,” he says.

“We have a French interpreter who is great. He treats these issues with a lot of sensitivity… but he is not allowed to go to the interviews,” explains Daníel. Sometimes, however, interpreters—who are provided by the migration officers—are not familiar with the terminology. “We’ve had cases of, for example, trans claimants having to explain to the interpreter what they were talking about because the interpreter did not understand the notion of gender identity or gender reassignment,” says Nuno.

“Interpreters may have their own biases and prejudices. And of course, that may negativly impact the claimants,” he adds.

Yves was able to prove that he was gay. He was able to prove that he would be in danger upon returning to Indonesia. And he was granted asylum in Sweden in just one year. He feels lucky. According to SOGICA data, most claimants that received a denial are refused for one of two reasons: lack of credibility or lack of provable persecution. Authorities either don’t believe that the claimant belongs to the LGBTQ+ community, or they don’t believe they would face oppression if sent back to their country.

In a rejection letter, the Migration Court in Stockholm writes about a lesbian woman from Kenya: “The country information shows that sexual acts between men are criminalised, but does not say that this is the case for women.” The letter also points out that since the claimant has not previously suffered persecution due to her sexual orientation, it is not credible that she is at risk in her country of origin. But several analyses show that LGBTQ+ people, including lesbian women, are subjected to police brutality and violence in Kenya.

Another cause for concern is the use of “discretion reasoning.” This means that some state authorities think that if the claimant hides their sexual orientation or gender identity, then it is safe to simply send them back. “But even if the claimant is willing to do it, there’s no guarantee that it will be possible or safe,” says Nuno, who claims that this practice is still commonly used in the UK. RFSL’s research shows that Swedish migration authorities also use it as grounds for rejection.

Activists point out that late disclosure is often a problem, although the Court of Justice of the European Union says that an LGBTQ+ person cannot be declared as lacking credibility on these grounds. “Sometimes after a family has applied, and been rejected, one of the kids decides to apply as a SOGIE claimant. Authorities treat them as using a ‘second excuse’,” says Fombu.

“Decision-makers should be more open-minded about what they are hearing. And they should accept that most stories are actually true, even if sometimes they may sound a bit odd to us. We have completely different experiences. We live in different societies, in different social, cultural and economic contexts,” says Nuno.

The situation is similar across Europe. Daníel claims that in Iceland not all LGBTQ+ asylum seekers are treated the same. “Africa thinks Iceland is a queer paradise, but Iceland is racist,” he says. He defends the government’s work in achieving equal rights for LGBTQ+ individuals but suggests that a culture of racism in Iceland influences decision-makers.

Europe’s image of itself as a progressive, free space is at odds with the unfair and prejudiced treatment that SOGIE claimants receive when they reach our borders. The fear and uncertainty that many asylum seekers face are such that one person in Iceland told Daníel that COVID-19 had brought him peace, as deportations were on hold. “At least I know what the next 14 days are going to look like,” he said.

“It is a long process, a tough time, and it’s very hard on LGBTQ+ people,” says Azad. 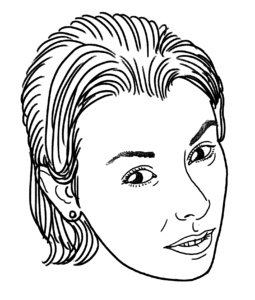