The Song for Shared Polish-Ukrainian Identities

Even before the invasion, millions of Ukrainians migrated to Poland. Has this created foundations that can be built upon now? 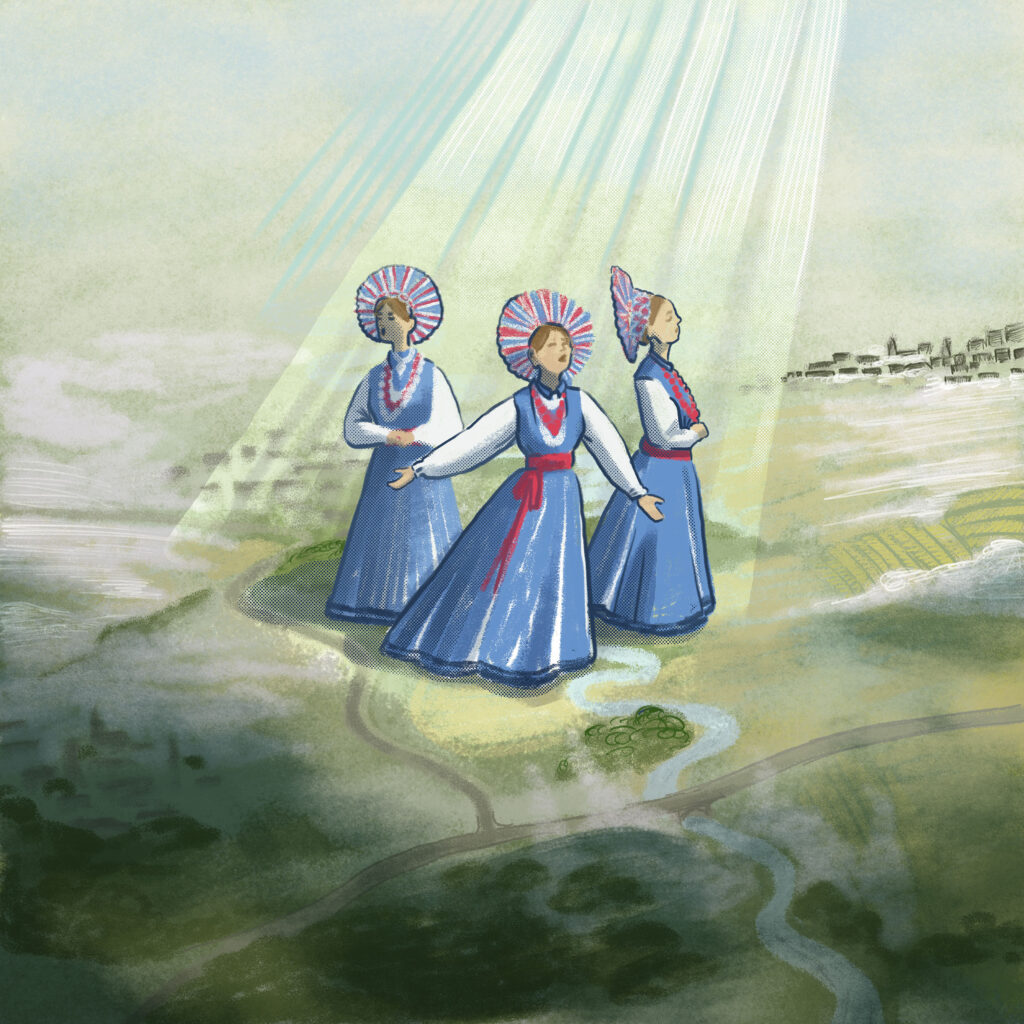 “You can see two dashes at the top and the bottom of our logo,” says Karolina Włodarczyk from the traditional folk band Zazula, which uses the letter Z as a logo. “Those are supposed to remind people of the planks of old barns in Poland and Ukraine.” According to Włodarczyk these planks are connected like the ties that bind both cultures and nations together. “Unfortunately, the letter Z doesn’t evoke good feelings anymore.”

We’re in the local cultural centre of the small Polish town of Grodzisk Mazowiecki, some 40 kilometres from Warsaw. Muffled voices and violins echo through the corridors. Here, by the long table of the conference room, the six singers of the Zazula band meet up for rehearsals. The energy in the air is vivid, playful. A joke here and a laugh there—the singers seem to escape into the safe realm of their art and away from the reality of war.

Two of Zazula’s members are Ukrainians. Several weeks ago, their families found themselves in the middle of the Russian invasion that took “Z” as its propaganda symbol. These weeks, phones are not put on silent while rehearsing, and they often vibrate on the table. The Russian invasion of Ukraine has become the main conversation topic as thousands of Poles offer their help—and even their homes—to refugees in an unprecedented expression of solidarity.

But the story of Zazula is much older than today’s conflict—and so is the story of Ukrainians in Polish society. One of the main characters in the band is Ania Zagórska, a Ukrainian with Polish roots and a specialist in white voice singing. She came to Poland to study in 2014.

“I never really wanted to come here,” she recounts. “But I had a problem at my university and it made sense to clear the air and move. White voice singing is something more unique here, so Poland was a good opportunity for a change.”

Until recently, five of the band members were singing in Mazowsze—one of the world’s most prominent folk groups and government-funded. The band showcased traditional Polish culture abroad for decades. Zazula emerged as a side-project in 2017 and took its own route from the very beginning. The mission was to sing in Polish and Ukrainian and inject the traditional Slavic white voice in Polish society, where it is much less popular than in its eastern neighbour. Aleksandra Myczkowka, a co-founder of Zazula, compares white voice to “the voice a shepherd would use if he wanted to be heard three villages away.” To understand it, one needs to imagine a choir with powerful, profound voices singing together. Of these voices, one will drag and become an echo of another, creating a cascade of melodic lines.

The band’s repertoire is still far from mainstream—but Zazula has already amassed tens of thousands of views on their YouTube channel, and their work has been featured in TV and video game soundtracks.

More than 2 million Ukrainian refugees have fled to Poland due to the full-scale war threatening their homes and lives—effectively making Poland the primary host country. But the migration route between the two countries dates back decades. At the end of 2021, the Centre of Migration Research of the University of Warsaw estimated that between 1 million and 1.3 million Ukrainians live in Poland, making it by far the most significant minority in the country of 38 million. In a 2017 poll conducted by the International Republican Institute (based in Washington DC), Ukrainians picked Poland as their favourite country.

“Poles are very similar to us,” says Yuri*, who arrived in Warsaw in 2012. “We share a lot in terms of mentality, but they are more determined. I believe that Ukraine is still building this sense of purposefulness in its society. Poles already have it.”

The comment may seem counterintuitive for someone who observes the bravery of Ukrainian defenders. But in Eastern Europe, a long history of unconditional love for their countries and distrust in the reliability of the state often go hand in hand.

Despite the overwhelming support for Ukrainians in Poland right now, all these years of living together don’t seem to have created much of a consciousness of what is shared. While Zazula reaches for a common culture, it tries to avoid touching upon a history fraught with injustice that divisive politicians on both sides have used and abused many times. When World War II drew to a close, centuries-old frictions erupted in the Volhynia Massacre, when Ukrainian nationalists killed up to 60,000 Poles. Most of the interviewees admit that they have had to face anti-Ukrainian sentiments connected to this dark page in their shared history.

Roman came to the country in 2000 to reconnect with his girlfriend, who missed him so much that she found a job for him in Poland. He admits he often had to “toughen up” to face issues at his construction job. Yuri once had to wait at the doctor’s until “he was finished with all the Poles first.” Maria Hud remembers a “fuck Ukrainians” graffiti near an Orthodox church in a town in eastern Poland where she used to live. “Big cities are more tolerant,” she says.

Among the Polish victims of the Volhynia Massacre was the family of Aleksandra Myczkowska. Sometime before the band was conceived, she went to Rivne in Ukraine with Anna Zagórska for a workshop on white voice singing. “It was then that I learned that my family was from that region,” says Aleksandra. “They ran away, warned by their Ukrainian neighbours.”

The manager of the band, Jakub Ćwiek, shares a similar family story, only that his grandfather is still alive and his memories are still vivid. People were killed with pitchforks and axes; some were tortured. Women were raped. “But now he is 84,” says Jakub. “He’s looking at the bombings on TV and says he doesn’t hold a grudge against Ukrainians. They deserve to live in freedom and dignity. Given how old he is, he hopes to live to see a free Ukraine. It’s the band’s mission to move on from those grievances.”

That mission is mainly fulfilled by embracing a folk culture that—when looked at closely—is based on similarities: everyday experiences, habits or even superstitions. To honour them could mean to heal. But for that to happen on a larger scale, Zazula needs to go mainstream and Poles need to try to understand their Ukrainian neighbours better.

“I don’t think Poles are interested in Ukrainian culture,” says Yuri. “They look West. But we have something in common. I went to Germany and I didn’t like it there. I feel better here. Poles are more alike.”

Things to build on

Roman is now a Polish citizen and his five year old son doesn’t speak Ukrainian. “I want him to, but I didn’t have the time to teach him.” Ania Zagórska lives in a home she bought with her husband in Grodzisk Mazowiecki. Roman, Ania, Yuri and Maria still identify as Ukrainian, but don’t have plans to go back—nor did they before the war started. “Maybe someday,” says Maria.

“When I’m here, I feel this… sadness,” Ania says. “Sadness for being here when people back home don’t yet live on the same level as I do. But when I’m in Ukraine, I often think about going home to Poland.”

It’s been years now that Poles share not only a border but towns, workplaces and flats with Ukrainians. Despite being so close, they have not yet succeeded in creating a common identity, but this could change with the effort of artists like Zazula and the emotional power behind the current war. But funnily enough, Poles and Ukrainians already share another experience central to who they are. In the last two decades, millions of people from both nations have migrated to countries richer than their own. They had to work from the bottom up and break through stereotypes to find a better life. Most of them still hold their countries in their hearts.

In that, they are the same.

*Name changed at the request of the interviewee.

At the end of 2021, between 1 million and 1.3 million Ukrainians live in Poland.

To understand white voice, imagine one of the voices in the choir dragging behind and becoming an echo of another, creating a cascade of melodic lines.

I don’t think Poles are interested in Ukrainian culture... they look West. 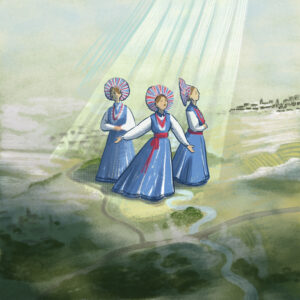