The Call of Coal

Is our energy transition too fragile to face the war in Ukraine? 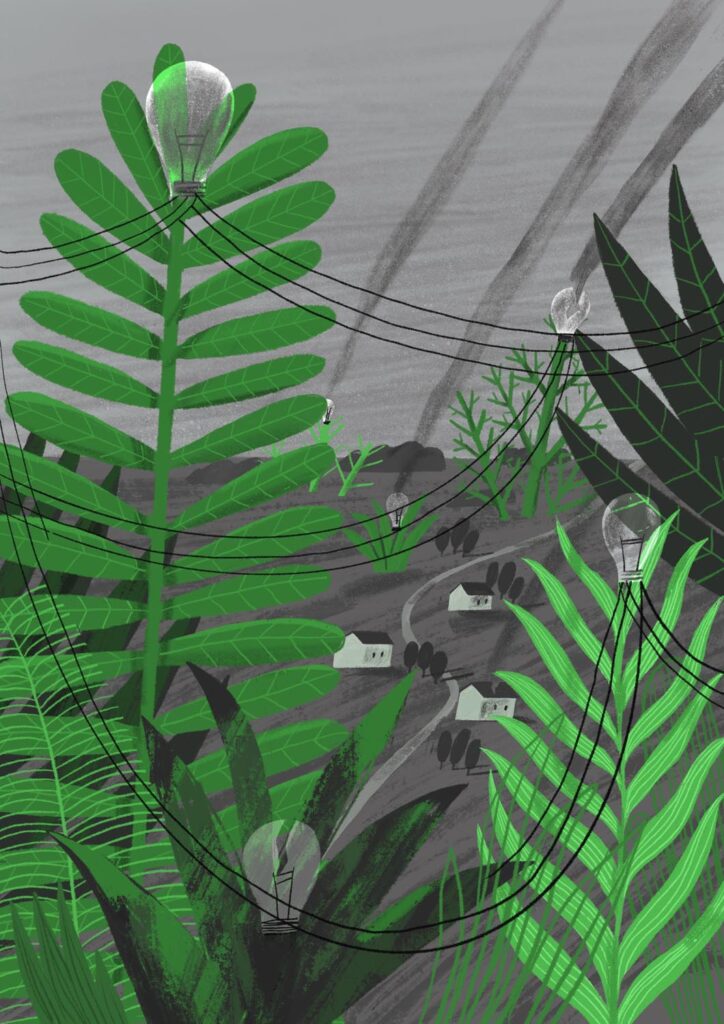 “Look! There are cargo ships bringing coal to the plant again!” says Luciano Damiani, gesturing towards two vessels silhouetted on the horizon between the sea and the sky. It is the first thing he mentions when we arrive at the station of Civitavecchia, a town north of Rome. Damiani is a member of Comitato SOLE, a local group of citizens advocating for environmental protection.

The seaside resort in central Italy hosts one of the two biggest and most polluting coal plants in the country. “We weren’t used to seeing that many coal cargo ships anymore. For the last two years, the plant worked only at around one-third of its potential. Now, with the rise in gas prices and the war in Ukraine, it’s working again at full capacity,” he explains on the drive to the plant.

In 2017, as part of the European Green Deal, the Italian government announced it would phase out coal by 2025, and operations were started for the gradual decommissioning of the Civitavecchia plant. Following Russia’s invasion of Ukraine, the Italian energy strategy made a U-turn. A legislative decree on 28 February 2022 required existing coal plants to increase their energy production, still conforming with the less stringent European Union regulations, but disregarding the emission limits previously set by national lawmakers. On the day after the invasion, the Italian prime minister Mario Draghi even evoked the idea of reopening decommissioned coal plants, causing widespread concern. The proposition was later dismissed by the minister of ecological transition, Roberto Cingolani.

The European energy crisis is older than the Russian invasion of Ukraine. In the last quarter of 2021, the economic boom which followed the Covid-19 recession and the dwindling of the EU’s natural gas reserves led to a shortage in supplies and increased prices, explains Michele Governatori from the Italian think tank ECCO. While on 8 April 2022 the EU adopted an embargo on Russian coal imports that will become effective in August, Russian gas and oil imports are not yet sanctioned. “Without sanctions, there is no real energy supply emergency. Reopening old coal power plants would be reprehensible,” says Governatori.

Italy is not the only EU country that is toying with the idea. Poland and Germany have also considered importing more coal or extending the life of their coal power plants. The war has brought the issue of energy security to the top of the EU’s agenda. Yet, as the war proceeds, most member countries are maintaining an ambivalent position. They seem to be taking encouraging steps to speed up their transition to renewable energy. At the same time, market prices suggest that the gas crisis might continue for the next two years, reports the UK-based energy think tank Ember. Failing to halt coal emissions could affect the health of people and jeopardise the EU’s climate goals.

In fact, most EU countries have committed to phasing out coal completely by 2030. The deal is part of the “Fit for 55” plans released by the European Commission in July 2021, which aim to reduce greenhouse gas emissions by 55% compared to 1990 levels by 2030.

This phase-out has been under way for a long time. Eurostat data shows that the production of hard coal dropped from 277.4 million tonnes in 1990 to 57.5 million in 2020. In 2021, 14% of the electricity in the EU was produced by coal, compared to 16% in 2019, according to Ember. However, some countries still rely heavily on this fossil fuel. For example, 44 coal power plants are still operating in Poland and the country has increased its use of coal since 2019. Of the 198 coal plants still in use in the EU today, 59 are in Germany and 31 in the Czech Republic, according to Europe Beyond Coal.

Italy has seven active coal plants, currently producing only around 5% of the country’s energy needs. Yet, their impact on the environment is heavily felt by local communities and hinders the national climate policy.

In Civitavecchia, the plant is right next to the town. “You can see it from every window in the city,” Riccardo Petrarolo, another citizen who is active in the fight against fossil fuels, tells us. Today, the smoke coming from the chimney looks thin and white. But, as he points out, that depends on the weather. Some days, a dark cloud of smoke stretches over the whole city.

After the second world war, Civitavecchia was designated to become the industrial hub of the Lazio region. Driving from the city centre to the coal plant, property of ENEL, Italy’s main big-oil company, we pass by a gas-fired power plant, a few industrial buildings, and the commercial and touristic port, where in summertime, cruises pour out hordes of tourists headed to Rome. “Now there are plans to build a biogas plant too, which is also very polluting,” says Damiani. Retired and with a long history of environmental battles weighing on his shoulders, he seems resigned as he walks on the small beach in the shadow of the plant.

“Coal is the single fossil fuel that causes the most greenhouse gas emissions,” explains Massimiliano Varriale, energy advisor at WWF Italy. Governatori adds: “Increasing power production from coal would also have a negative impact on air quality.” He explains that, “according to the European Environmental Agency, this is the cause of over 70 thousand premature deaths in Italy every year.”

Scientific studies prove that people who live near coal power plants are more likely to suffer from respiratory, gingiva and skin symptoms. Activists in Civitavecchia tell us that they are following the developments of a trial against the executive directors of another Italian coal plant. In Vado Ligure, some 500 kilometers north on the Tyrrhenian coast, they are facing charges of causing environmental and social disaster. Mortality in that area is higher than the norm, by 50% for cancer, 90% for respiratory diseases and 39% for cardiovascular conditions.

“I don’t have data [for Civitavecchia], but I have memories,” says Petrarolo. “Seeing that chimney smoking again, as it did two years ago, makes me think of the battles we lost, all the friends who are not here with us. Yes, we’re fighting for a fossil-free future, but we’re also fighting for survival.”

“For the past 70 years, the same industries that have endangered our health have also been our main sources of employment,” says Mathias Mancin. He grew up in Civitavecchia and leads the local Fridays for Future group, the climate movement founded by Greta Thunberg. Like Petrarolo and Damiani, he is convinced that battles for environmental justice have increased social cohesion in the town. “We understood that we needed to talk to the coal workers and port workers, that our demands are not that different,” Mancin comments.

In coordination with local institutions, Mancin, Petrarolo and Damiani are pushing through their associations to make Civitavecchia an avant-garde hub of sustainable energy in Italy, with the creation of an offshore wind power plant. This would provide employment for the workers of the decommissioned coal plant. The project is pending examination by the Ministry of Ecological Transition. It is not the only project for the sustainable transition that is collecting dust on Italian shelves. The country is struggling with the planned shift to renewable energy resources, mainly solar and wind plants. Varriale explains that Italy is currently producing only one of the eight gigawatts of green energy a year that it would need to meet its decarbonisation goals by 2030. Many projects for renewable resources take several years to obtain bureaucratic approvals.

However, clean energy can be the solution to end gas imports from Russia without moving back to coal or investing more in gas, writes Sarah Brown, Senior Energy and Climate Analyst at Ember. The key lies in delivering the Fit for 55 packages and speeding up the process to access more renewable electricity and focus on energy efficiency.

“Is it recognised that wind and solar are cheap and homegrown, and offer the most viable solution to both energy security and high energy prices,” Brown says. However, the necessary infrastructures for producing and storing renewable resources, which would grant countries energy security, are a work in progress across the EU. The coal plants are a quick fix to keep prices down in the short term, says Jens van ‘t Klooster, assistant professor for sustainability at the University of Amsterdam. However, coal is no viable option in the long run, considering its uncompetitive price, increased by the EU carbon tax, and its environmental impact.

Looking at the longer term, van ‘t Klooster says: “I am less worried about some more coal emissions, than about the ways in which we might miss opportunities to change the way we use energy.”

To avoid this, the EU is taking action. In the 8 March 2022 press conference, the European Commission proposed the plan “REPowerEU,” to make the EU independent from Russian fossil fuel imports by 2030. The emphasis here is on accelerating the transition to renewable resources and implementing the Fit for 55 package, amongst other things.

“The window of opportunity to adapt to climate change is closing,” says Varriale, quoting the 2022 report of the UN Intergovernmental Panel on Climate Change (IPCC). “Everything that goes towards the mitigation of the effects of the climate crisis is good, and everything that leads in the opposite direction is dangerous. Wasting time is not only wrong but criminal.”

At the seafront of Civitavecchia, few people cross the square near the port on this warm mid-March morning. A couple of cruise ships are anchored at the docks. Damiani shows us the name of the square: “048,” the identification code for oncological patients in the Italian healthcare system. It was one of his first battles to remember the victims of industrial pollution and raise awareness among the local inhabitants. Now, they are facing the risk of a postponed energy transition. “The possibility that the plant may not close down for good in 2025 pisses us off,” says Petrarolo. “But first and foremost, it simply terrifies us. It would be a nightmare.”

According to the European Environmental Agency, coal production causes over 70 thousand premature deaths in Italy every year.

In Partnership with Bozar Brussels