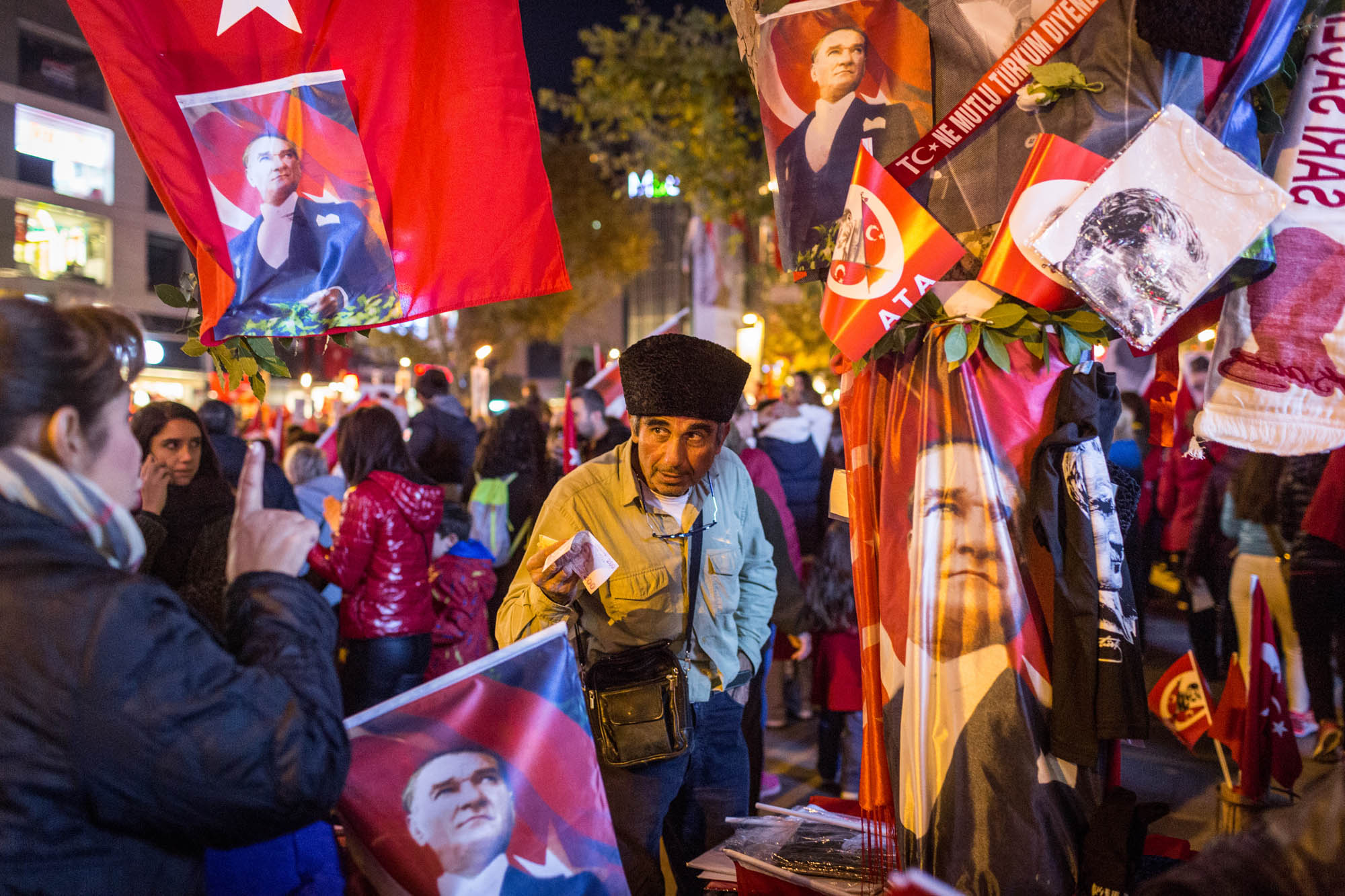 The icon of a secular Türkiye

On 29 October 1923, a modern nation rose from the ashes of the Ottoman Empire. Mustafa Kemal Atatürk, the founder and first president of the Turkish republic, declared Türkiye to be a secular republic based on the separation of the powers of state and religion.

Almost 100 years later, the adoration of Atatürk is alive and well, and his image is commonplace. The relationship with the leader’s legacy is more complicated in the country’s southeast, where the Kurdish ethnic minority is concentrated. Some Kurds see Atatürk’s nation-building as an attempt to erase Kurdish and other minority cultures. While there are hardly any images of Atatürk in those regions, the rest of Türkiye seems to be wallpapered with his icon.

Despite his omnipresence, Atatürk’s image is now seen as a sign of political opposition to the ruling AKP party of Turkish president Recep Tayyip Erdoğan. Many citizens raise his image as a subtle sign of discontent. They feel that the modern-day republic has strayed from Atatürk’s secular principles.

Perhaps the most visible example of the growing role of religion in Turkish politics is the reopening of the Hagia Sophia as a mosque in 2020. Initially built in the 6th century by Roman emperor Justinian I as the Christian cathedral of Constantinople, the building has served many purposes—and many ideologies. In 1453, the architectural gem was converted into a mosque after the fall of Constantinople to the Ottoman Empire. Almost five centuries later, Atatürk stripped the site of its religious status and opened its doors to the public—of all faiths—as a museum. Atatürk’s decision to secularise the building was symbolic. So was Erdoğan’s move to reverse it.

The mounting tensions between Turkish secularists and theocrats parallel a growing distance between Türkiye and the European Union. Yet, there is still a persisting Turkish-EU cooperation, albeit not a positive one. The EU has used Türkiye as a buffer for migrants and refugees who transit through the country before arriving at the southeastern borders of the EU. To block people from entering, the EU has provided billions of euros in funding to make staying in Türkiye more appealing than migrating further west. The darker side of this is the well documented practice of illegal “pushbacks” by the Greek coastguard, where migrants and refugees are forcibly returned to Turkish waters.

In Türkiye, any anti-government opinions must be worded with care—the law makes it illegal to insult the Turkish state. But that same law, Article 301, prevents the government from erasing Atatürk’s image despite it slowly transforming into a symbol of the opposition. Any purposeful degradation of an image of Atatürk—even one drawn by hand on a wall—can be seen as a criminal act, and therefore cannot be removed. In a country where self-censorship is rampant, and public protest is harshly suppressed, the image is a “safe” form of protest against the government and its values.

Like many symbols, Atatürk has his antithesis. During the past two decades, Erdoğan has also amassed a cult-like following and his image has become increasingly present in Turkish daily life. His likeness hangs from street corners, adorns large billboards, and is printed on a range of merchandise. These two icons of the Turkish Republic—the first and the most recent—are in a visual clash of politics and ideology.

This photo series depicts how Atatürk’s legacy is worshipped today, from flags and hastily drawn images on the side of buildings, to clothing and the country’s only impersonator. To top it all off, Atatürk’s face appears on a hill—in the form of a silhouette—for two weeks every year. During the summer, the sun sets at a certain angle, and the shadow cast on a valley between two hills bears a striking resemblance to Atatürk’s face. A viewing platform on an adjacent hilltop allows people to celebrate weddings, sell popcorn and take the obligatory selfie outlined by his presence. 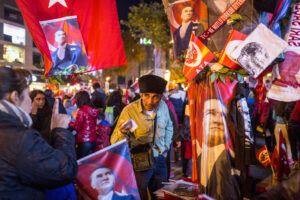