The poetry that untangles roots, power and womanhood 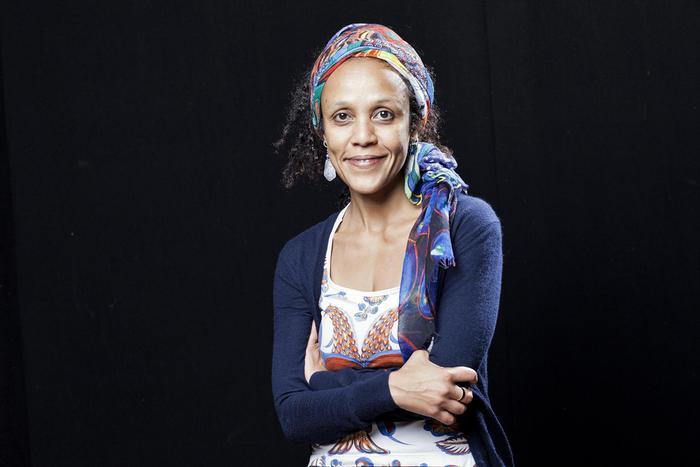 Ubah Cristina Ali Farah, a Somali and Italian poet, sits down for an interview with Are We Europe in her peaceful garden in Brussels. There are no real questions, though. Instead, we use fragments of her poetry as conversation starters.

I grew up in Somalia in the seventies and eighties. In those years, Somalia underwent a profound change and wanted to adopt Somali as the language for education. It was an ambitious project and a radical change. Somalia was cut up and divided between different colonial powers and each taught in their language. After Somali independence, the government dreamt of unifying the country and overcoming the differences in colonial administrative languages. My father was politically engaged and deeply believed in this project, but the situation was layered at home.

The stereotype of colonial power is a white man marrying a black woman. Whereas for me it was the opposite. My mom is white and Italian. She was very young when she met my father and moved to Somalia when she was twenty. And suddenly, she arrived in a very patriarchal society where she was the fragile one. She represented the colonial power. But in that case, she was the one who didn’t have power at all. Simply because she entered a world of men.

My mother never learned Somali, so I somewhat became her translator. Because we didn’t have television, my mother encouraged me to keep a journal and paint the world around me. And while the language of everyday life was Somali, I would write about it in Italian. This switching back and forth between languages, I believe, has been essential training for my writing.

I stayed in Somalia until I was 18 when the civil war started in 1991. I had already become a mother as a young woman and witnessed this parallel between childbirth and war, both violent and bloody experiences. It was so unspeakable, both maternity and what I had seen during the war, that I could no longer write. It was also a kind of modesty because I asked myself why people would be interested in what I had to say or why they would care.

Many Somalis fled to Italy during the war because it had been an Italian colony. But Italy didn’t have any space. So they spread out. My mother had gotten a job in Hungary, and I joined her there before going to university in Italy. My father ended up in a small town in the Netherlands. We didn’t have cheap Ryanair flights back then, so travelling was something that you had to plan and save up for.

Six years passed before I saw my father again. As soon as I arrived, people from the community came to welcome me. And not only my father, but also people I knew from before who started talking, talking, talking. There was a need to talk. Everybody was telling their story. And their stories were not so different from mine. That moment of recognition was so important for me, and I regained the ability to write. I felt the responsibility to write. And to write in Italian because Italy does not recognise the catastrophe and that they are also historically responsible for what’s happened to the country.

The obelisk of Aksum was a very sacred monument. And this is about restitution. Italy took this obelisk which had always been in the city of Aksum in Ethiopia. And they put it in front of—oh, can you imagine—the ministry of the colonies.

When I arrived in Italy in the nineties, the country witnessed the surge of the right-wing Lega party. Until then, Italians had mainly emigrated from Italy to the outside in search for better job opportunities. Suddenly, people realised that Italy was no longer a country where people were leaving, but one where people were arriving.

Italy did not recognise that the people coming from Ethiopia, Eritrea and Somalia were the people they had colonised. And it just refused them, mistreating them. Again, there’s a parallel between the human body and a symbol of trauma, the monument.

Writing helps you come to terms with what is happening to you. It’s not an outpouring of emotions. That’s not literature. You have to learn to control these feelings and to use them, to locate them. It’s very useful because you need to use your intellect as well.

A written form of Somali didn’t exist before 1972, but Somali oral literature has a very strong tradition based on powerful poetry, which in turn is based on melody. But it’s very codified—you cannot write whatever you want. Each type of poem has a name. Alliteration is a must. Then, the number of syllables you should use is defined. For each poem, there are different differential equations.

Somalia is a nation of poets. And while poets are almost sacred in our society, Somalia is very patriarchal. Poetry written by women is not regarded with the same respect as that written by men. It’s usually sung during all things connected with the life cycle: birth, weddings, female genital cutting etc. Male poetry, because it was considered prestigious, has been memorised and repeated to withstand the test of time. But women’s poetry hasn’t.

Somali men—and writers specifically—are so used to being in power, but this power gets disconnected in the diaspora. They no longer have the position in society that they used to have. Often, it is women in the diaspora who are the breadwinners.

Through intimacy with other women, women are able to put down roots more easily than men. We change our lives by being and staying together. It’s the idea of building new families that are elective, not based on blood. Somali men are so stuck in this old position of power that they cannot talk about their emotions. It’s a very important ability that we have as women, and we also have a responsibility as educators to pass it on to younger people.

My poetry often builds links with the women that preceded me—to legitimise myself through what other women have done. I’ve always been proud that everything I have done thanks to older women, women with more experience than me and younger women who help me understand things differently.

You must look inside at who has come before you and what they have done. Their stories are not only in our DNA but also in our knowledge.

In our society, intimacy is something collective. In the hammam, for example, you will find belonging. We live this intimacy as we wash each other altogether. The stereotype about Islam is that women are always covered, but being naked in front of another woman is normal. You can be old. You can be young. The intimacy of the body is something we share.

It’s also a way not to think about what society tells you: you must look like this. There is no judgement between women in the hammam. It’s very cathartic.

When there is trauma, people always make up things—I do as well. Sometimes, I remember everything very well. But when you are being interviewed to receive the status of “refugee”, they ask very precise questions and if you don’t respond as well as they want you to, it’s a matter of life and death. It is so scarring and people sometimes don’t remember or mix things up, and imagination becomes your only salvation. Like an image of sunflowers. It’s not linear, this story that people tell about their own trauma. The idea of rest is also about taking a break from this request of constantly telling your story. In Western cultures, the general idea is that everything should be tailored rationally and linearly. That is not true. When there is trauma, you are not able to do so.

Hair has always been important for Black women. But it’s a different narrative for me. It’s something intimate and a sign of care that also connects me with my white mother. I learned Somali from my young auntie who used to braid my hair. But when I was going to Italy, my grandma would comb my hair and calm me with her strokes. Knots are the symbol of both my connection and disconnection. It’s a conflict, but it is also a very strong link. 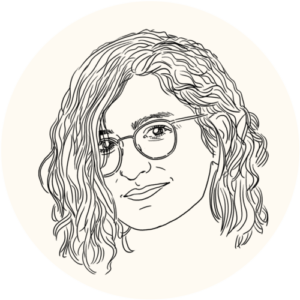 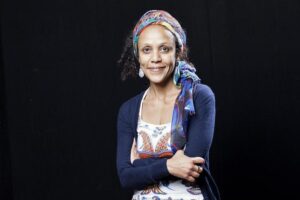 In Partnership with BOZAR Brussels