Understanding the Russian war on Ukraine through a new religious divide 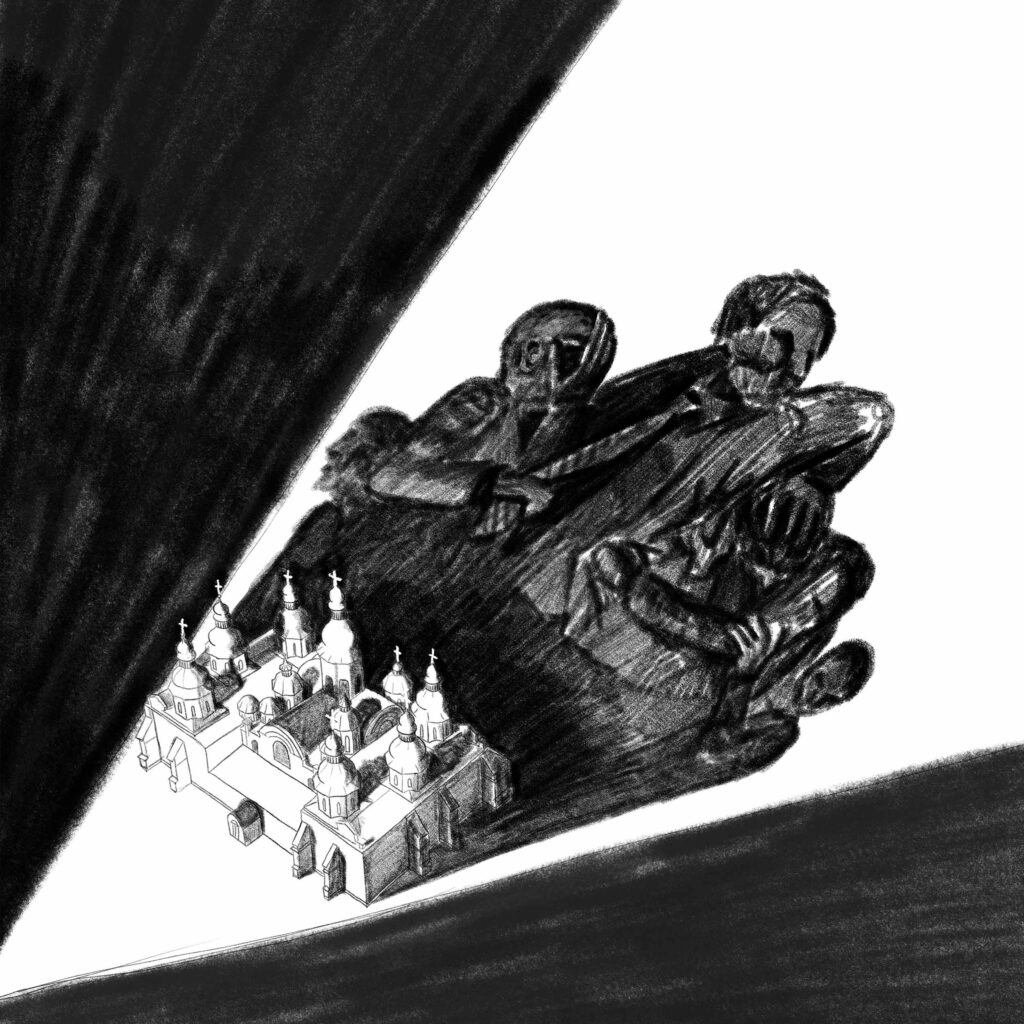 In the heart of Kyiv, between the Central Station and the Dnieper River that flows through the Ukrainian capital, the winter sun bounces off of eight gold-capped pinnacles. The shiny turrets belong to a stunning white-and-green building in a peaceful city park. This is the St. Sophia Cathedral, an 11th-century church that serves as the heart of three denominations. The complex could have been a symbol of Christian unity and the shared spiritual roots of Russia and Ukraine. But things turned out differently. Dramatically.

A week after the Russian invasion of Ukraine, a foreboding message appeared on Twitter. According to unnamed intelligence services, the Russians were preparing an “air attack on St. Sophia’s Cathedral in Kyiv”. The tweet came from the Ukrainian embassy to the Holy See, the international headquarters of the Roman Catholic Church, which is also the autonomous mini-state of Vatican City.

Tensions between the various Christian churches in Ukraine have regularly run high over the past centuries. In 1995, the cathedral was the scene of a bloody battle during the funeral of the Ukrainian Patriarch Volodymyr, leader of a self-declared independent Ukrainian Church, who had spent two decades in Soviet prison camps before living in exile in Canada.

When the Ukrainian government refused to allow his burial inside the cathedral, supporters of the patriarch attacked police with sticks and stones, injuring dozens of people, including 25 priests, 35 police officers and four journalists.

The cathedral has rarely been used as a church since then to avoid further tensions and conflicts within its walls. Most of the time, this unique religious building—whose magnificent historical frescoes make it a UNESCO World Heritage Site—functions as a museum.

Today, it’s a pawn in a game only Russian President Vladimir Putin seems to know the rules of. Putin is not known as a devout believer. He grew up as an atheist, worked for the secular KGB for years, and only converted to the Russian Orthodox Church in his forties after the fall of communism. It was the right time: in a fundamentally changed world, the Russian people needed another narrative to define themselves. And this one would be intrinsically linked to the Russian Orthodox faith.

Dreams of a great empire

Many have explained the Russian invasion of Ukraine through a geopolitical lens. But Putin’s obsession with his smaller neighbour goes further than individual psychology, large-scale strategy and imperialistic dreams. Above all, the current invasion of Ukraine is a war about the building of Russian identity through religion. Because the historical origins of Russian identity are not to be found in Moscow or St. Petersburg, but… in Kyiv.

It was here that Prince Vladimir ruled at the end of the 10th century over the massive empire called Kievan Rus’. The pagan ruler with the dubious nickname Fornicator Maximus (great profligate) converted to Christianity and was baptised in 988. Many followed—legends tell of mass baptisms in the Dnieper River.

The current dreams of a great Russian empire go back to this origin story. According to this thinking, the three present-day countries of Russia, Ukraine and Belarus essentially and existentially belong together. Moscow often says they come from the same ‘baptismal font’, but that is putting it mildly on the Russian side. While Kyiv was already a powerful city in this game-changing 10th century, Moscow was still a completely unknown place. The first mention of the actual Russian capital dates from 1147. Only later did the power gradually shift from Kyiv to Moscow.

This harmonising thinking about a strong “Russian soul” that unites Russia and Ukraine has suffered two significant dents in recent decades: political and spiritual. In traditionally Orthodox countries, these two levels are very often inextricably mixed and intertwined. Orthodox Churches belong to a territory. Most of the fourteen (or fifteen, as we shall see) autonomous Orthodox Churches that form the Eastern Orthodox Church are national Churches, with close ties to the political sphere with an often underestimated political influence.

The almost divine trinity of the three countries of Russia, Ukraine and Belarus crumbled in 1991 with the infamous fall of the Soviet Union. Ukraine became independent and—with newly democratic sovereignty—started to look more and more towards the West, building political relationships with the European Union and NATO.

Lesser known is the second significant dent when in 2018, an independent Ukrainian Orthodox Church was established in Kyiv. According to Orthodox tradition, the territory of Ukraine fell under the Patriarchate of Moscow, and this new church shook the very core of those foundations. It acted as a national church, with the active support of the political class in Kyiv and the official recognition by the Patriarchate of Constantinople, the honorary head of all Orthodox Churches.

Schisms within the church

In Ukraine, most of the population—almost three-quarters—is Orthodox. Elderly Orthodox believers very often stayed loyal to their priests and parishes that remained under the rule of Moscow. Younger Ukrainian believers felt much more attracted to the new Church that underlines the aspirations of national independence. But, in general, they attend church services less frequently.

Suddenly, Russia’s soul—polished up again with the Orthodox faith after the fall of Communism—was existentially threatened. The umbilical cord with its own history was cut twice: politically in 1991, religiously in 2018. For many Russians, the second was even more painful than the first.

The response in Moscow was one of fury. Since then, Russian Orthodox liturgies don’t mention the Patriarch of Constantinople anymore—a dooming schism within the Orthodox Church.

At the time of the Russian invasion, almost two-thirds of all Orthodox parishes in Ukraine still belonged to the Ukrainian Orthodox Church under Moscow. But nearly two-thirds of the population said they felt at home in the new, independent church. And more and more parishes moved away from Moscow. Ukrainian politicians were actively supporting this shift. According to Ukrainian law, once two-thirds of all parishioners vote in favour to move to the new Church, everything—the building, the money, the whole organisation of the local parish—transfers away from Moscow.

As a response, Putin tries to legitimise his attack on Ukraine with religious arguments. In his speech on 24 February 2022—in which he announced the recognition of the two separatist republics of Donetsk and Luhansk and thus effectively started the war—he spoke of the “religious persecution” of Russian believers.

Vladimir Putin and the head of the powerful Russian Orthodox Church in Moscow, Patriarch Kirill, had already long been mixing up the narrative of a Greater Russia with the idea that the West and Russia are irreconcilable. Western encroachments on the traditional family, normative heterosexuality and the strictly distinguished roles of women and men were a thorn in the side of the Russian Orthodox Church, and Putin likes to use this narrative to diabolise what is—in his eyes—decadent Western culture.

Putin uses Kirill. And vice versa. Because the Russian Orthodox Church benefits from the active support of the Russian government. In recent years, hundreds of Russian Orthodox churches have been built in Moscow alone, with local or higher authorities’ active and financial support. After all, a new chapter must begin after the atheist-communist era and rebuilding a Christian nation is a political priority. Church and state are officially separate, but interests are shared, and mutual support is not concealed. On the contrary, it is widely and proudly reported in the Russian state media.

Here, Putin sees himself not only as a conqueror but first and foremost as the saviour of Russian culture and the saviour of the soul of Ukraine, which has fallen prey to everything Western: heretic (Catholic, Protestant), decadent, liberal.

But this religious ideology, propped up by the Russian Orthodox Church, is confronted with a harsh reality shortly after the invasion. The leader of the Ukrainian Orthodox Church under Moscow turned against Putin the very day of the first air raids and called on Patriarch Kirill to raise his voice. Many dioceses and priests of this Moscow-faithful church follow suit and now refuse to mention Kirill during the liturgy, as the church rules prescribe. And more and more clergy members and parishes seem to be interested in switching to the new, independent church.

What Putin and Kirill wanted to prevent, they appear to be hastening: the religious breaking up of Russia and Ukraine. It’s now a personality crisis—identitarian and existential. Russian society will have to look for another narrative: it can no longer build on the Christian baptism of Prince Vladimir.

Kirill continues to support his personal friend Putin through thick and thin. During sermons in the Cathedral of Christ the Saviour, he gives two main reasons why the attack is legitimate: it is about the “protection of Russia and Ukraine against gay pride” and “other devilish practices from the West.” According to him, it is the defence of the inseparability of the Ukrainian and Russian people.

Church leaders from all over the world, and even bishops and priests from his own church, beg him to bring Putin to his senses, but nothing helps. Putin and Kirill have become wholly absorbed in their ideological mission.

As if you are in heaven on earth

The first stones of the Cathedral of St. Sophia were set in 1037, seventeen years before the church schism between the Catholic West (Rome) and the Orthodox East (Constantinople). Both the Ukrainian Orthodox Church under Moscow and the new, independent Ukrainian Orthodox Church lay claim to the Cathedral of St. Sophia. To make things even more complicated, so does the third religious movement in the country—the Greek Catholic Church.

This church falls under Rome, with an ecclesiastical law that includes the possibility for priests to marry and a liturgy that resembles the Orthodox liturgy like two peas in a pod. The Greek Catholic Church accounts for about ten per cent of the Ukrainian population. There have been allusions to a merger between these Ukrainian Catholics and the independent Orthodox Church. And thanks to Putin’s war-waging in Ukraine, more and more believers and clerics who fall under Moscow’s jurisdiction will feel called on to join a unified Ukrainian Christianity.

At the time of writing, St. Sophia still stands. When the sun shines, its magnificent domes shine, and you feel as if you are in heaven on earth. It’s the basis of the Divine Liturgy in Orthodox churches—and why the services last so long on Sunday mornings: for Orthodox believers, it foreshadows, and even allows you to briefly participate in, the eternity that awaits you after death.

Perhaps the cathedral can again become a sign of Ukrainian and Christian unity one day. Maybe they can use it again for their liturgies as separated churches. Imagine people from different denominations even praying here together one day. But the flag shall always be at half-mast for the thousands of lives the terrible war has claimed, even if it manages to bring separated Christians closer.

According to Orthodox tradition, the territory of Ukraine fell under the Patriarchate of Moscow, and this new church shook the very core of those foundations.

Today, the St. Sofia Cathedral is a pawn in a game only Russian President Vladimir Putin seems to know the rules of.

In recent years, hundreds of Russian Orthodox churches have been built in Moscow alone.

Perhaps one day the cathedral can again become a sign of Ukrainian and Christian unity. 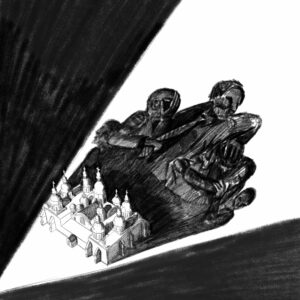